HEADLINE: WBC continuing to hockey stick from 1.0 to 3.8 which means ANC is probably gonna be above 1.0. While the ANC results aren't in, I heard from the team that they are going to discharge me today.  Probably mid-afternoon.  Even my platelets are up on their own, fevers are gone, etc. 😁 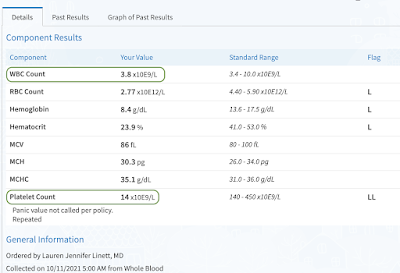 If/when the ANC number and the rest of the differential come back I'll update this post.  Also, related to concerning "Blasts" row in yesterday's post, I heard back from from Dr. Damon.  I asked:

WBC and ANC look good but what does the blasts mean? Does it mean the induction didn't work?

Normal blasts (not leukemic blasts) often come out as the marrow recovers under the influence of G-CSF. This is supported by the big jump in neutrophils and that you are making platelets. I think the treatment has worked.

Now, on to sports.  Don't ask me how Carolina threw that game away, but I'll take it. 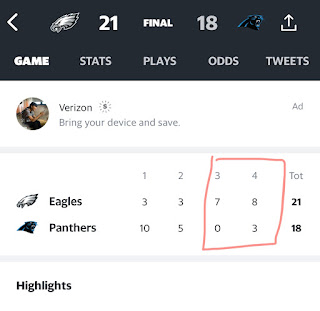 Sure, "a win is a win" but this Eagles team is not good.  Sirianni's play calling, the unwillingness to run the ball, the penalties, Jalen Hurts' inaccuracy and real-time decision-making, Sanders' idiocy of running out of bounds twice?  I mean, the defense played great, but Sam Darnold helped us out with the picks... right Raff? 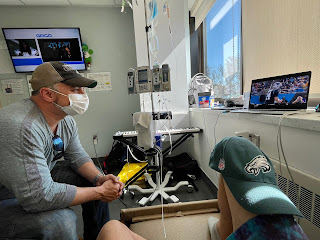 Oh, my bro (who was at the game in NC) captured this little gem on the way out.  E-A-G-L-E-S EAGLES!