Next up is the San Francisco Big Climb which takes place on April 29, 2023 at Oracle Park. More details on how to climb with us soon. Need a few more 2022 donations for tax purposes? No time like the present. :) My (still to be customized) fundraising page for the 2023 Big Climb is here.

Down With Disease, Up Before The Dawn

OK, first things first.  My Phish Tribute Band, Chum is playing a gig at the HopMonk in Novato, CA on Friday May 27th -- get tickets here! -- and unlike the Brick & Mortar gig from April, I'm playing the whole show!  So come on out and see your pal jg rock out. (And yes, I'm posting this first so that this lovely HopMonk beer image can be the blog preview pic!) 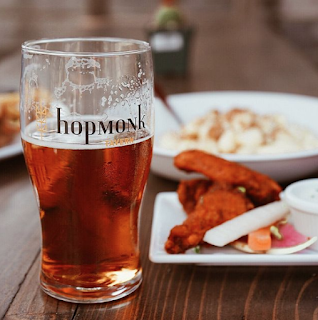 OK... on with the blog.  As if two bouts with AML weren't enough, this week I'm dealing with COVID.  Yup, I guess this new surge is real.  I've been pretty careful, but obviously not careful enough.  Last week I'd been feeling a little sniffly and fatigued so I had to report my symptoms before my (now somewhat routine and bi-weekly) UCSF visit with the team last Thursday.

If figured it was just a cold. UCSF wasn't so sure. They allowed me to come to clinic, but we took lots of special precautions: essentially, I was isolated to a single room where folks came to me -- wearing hazmat gowns -- for blood draw, vitals, the actual appointment, etc. (vs my moving freely about the clinic.)  They also did a (reasonably invasive) swab PCR test just to make sure I didn't have COVID.  Well, all my blood counts were pretty normal, but Friday morning the PCR results came back... COVID positive.

Fortunately, it looks like I still have some pre-transplant vaccine antibodies plus I received the double-dose of EVUSHELD earlier this Spring.  These combined with Martin's awesome immune system seems to be doing the trick.  I'm still tired and feel like I have a mild flu, but the worst seems to finally be over.  The last few days (including most of the weekend) saw lots of rest with Katniss Everdeen, the COVID love kitty. 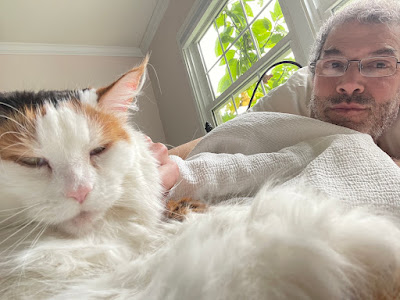 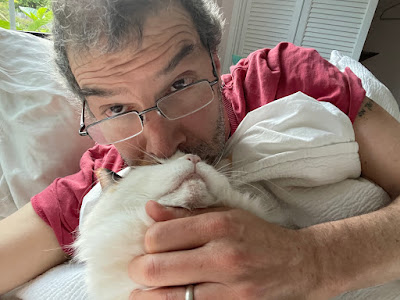 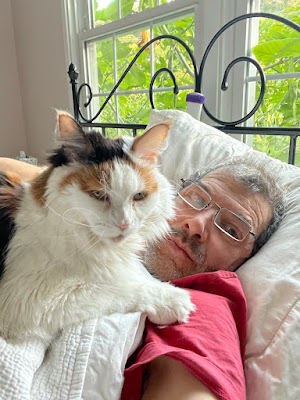 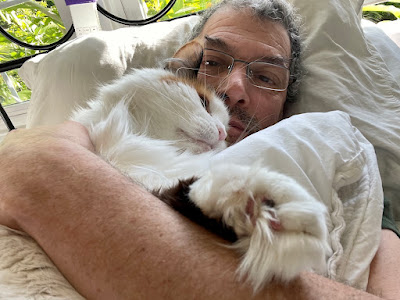 On Sunday, despite still not feeling great, I masked up and made some black bean, chipotle chicken, Mother's Day nachos.  Only captured the "before" picture, unfortunately. 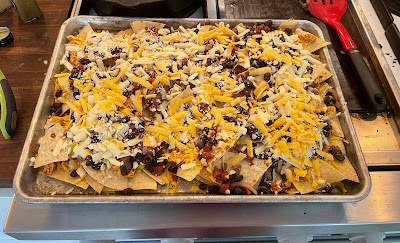 While I was prepping food, Orion was making a Mother's Day card.  As we later chatted about on our family text thread, Orion makes nice cards, Floyd makes smoothies and farts. 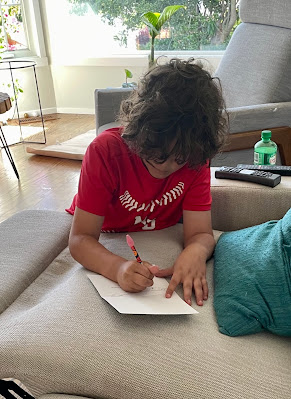 I've also been drinking my (patent pending) COVID-B-GONE juice which is essentially a Virgin Bloody Mary, but instead of the base being tomato juice, it's half V8 and half Pressed Juicery Greens 1.5.  You can see the final product in the Eagles pint glass.  And no, there's no vodka in it. 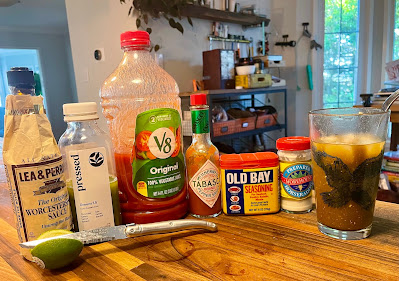 Did the juice work?  Is there really an elixir in the form of a (somewhat) healthy salty, spicy, morning drink?  Not really.  Stillllll positive as of this morning.  Gotta test negative by this Thursday if I want to able to rehearse with the band. 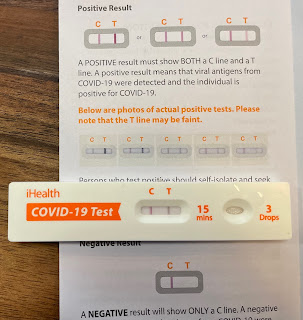 Other than the COVID set back, things continue to move in a positive direction.  Each week we are removing one (out of the original 14) tacrolimus pills per week.  As of this week, we're down to 5 total pills.  If there's no sign of GvHD, we'll go down to 4 next week.  Does that mean I could be completely off the Tac in a month?  I suppose it's possible.  IIRC, last time, the very end of the taper slowed down a bit, so we'll see.

Only other thing of interest to report on -- since I'm not going to bore you all with kids' baseball stuff -- is The Big Climb which took place at Kezar Stadium on April 30th.  The event was a great success and we collectively raised almost $400,000 for LLS.  A huge, heartfelt THANK YOU for everyone who donated to my campaign and Team Greene.  And a huge thanks to Cyril and the Kezar Pub for donating the beer for the beer garden!

Only thing that could have been better is the venue/workout.  There just weren't enough steps for it to be a real climb.  Next year it either needs to be at the Salesforce Tower or AT&T park.  Here are a few pics from the event. 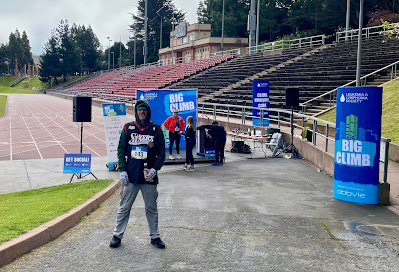 Me at the open 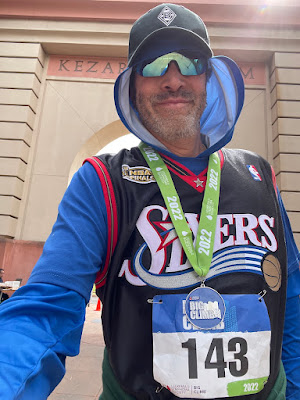 Me after the climb (with my badge) 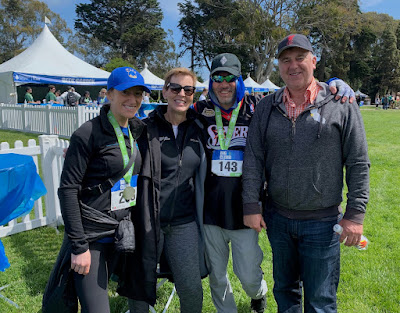 Me with Katie (Salesforce), Kris (LLS), and Cyril (Kezar Pub)