When The World Is Running Down

Remember those long assignments in school that you put off starting 'til way too late because you just didn't even know where to begin?  That's how I feel about this blog entry.  At the end of my last post, I talked about how I need let go of control and accept the things I can't change.  Well, if not for this mantra, I think I'd be going bat-shit crazy right about now.

So here's what's going on... I'm just gonna get it all out there.

Last Saturday morning, Orion tested positive for COVID.  This wasn't a huge surprise since a bunch of his friends had tested positive earlier in the week and O was feeling crummy on Friday.  So what do we do?  Well first we quarantine him in his room, I don't go anywhere near him, and the rest of us take major precautions.

So Orion was banished to his room and Floyd, understandably, wasn't allowed to go to the Super Bowl party at his friend's house on Sunday.  So all the party food he prepared (jalapeño poppers, garlic knots, and wings) had to be consumed by the Greene family.  Decent consolation prize.

Next, I need to report possible exposure to my UCSF team, and we need to figure out what this means for my upcoming appointments.  The answer?  I can't come to clinic until 11 days after exposure and I have to of course test negative 5+ days after exposure.  More on that in a bit.

Back to Orion... so Sunday night after the game -- congrats Stafford and the Rams! -- we're trying to plan the week.  Now Monday is supposed to be this milestone day.  Not only was I supposed to get my Hickman Line removed, but it's also Heather's and my anniversary!  Now it's not like we could do anything fancy anyway... I'm not going out to restaurants or anything... but we were still hoping to do something nice after my double UCSF appointment to celebrate.  Plus, Tuesday was supposed to be my official "part time" back to work day.

Instead, Heather drove Orion up to "Camp covid" -- a friend's house in Dillon Beach where 3 of his COVID positive friends were quarantining -- on Monday morning.  We think he's coming home tomorrow morning. 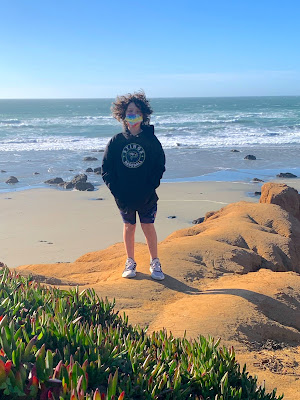 Orion on the beach 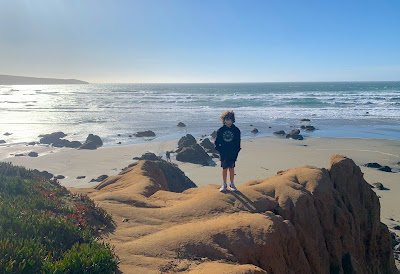 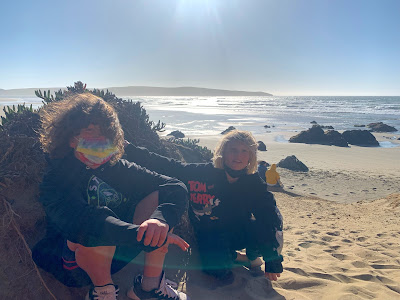 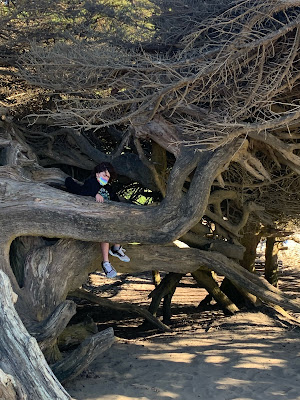 Words cannot express the gratitude we feel for the Camp Covid moms.  Thank you, Tammy, Jen, and whoever else was up there.

So what did I do Monday?  I worked!  Mondays and Tuesdays are the two busiest days at Vineti, and it was actually good that I got to attend a couple key meetings.  Yesterday was busy too... so much so that I didn't really get any exercise on either Monday or Tuesday.  Not good.  So I'm working on my "jg re-entry to work" V2MOM and I obviously need to prioritize health first.  That includes getting enough exercise and rest.  Oh, and Heather and I decided to officially postpone our anniversary until we can make it a bit more... normal.  So there!

So today, I'm only working a couple hours and focusing on physical and mental well-being.  I already did a Pelo ride and was able to break my previous AML 2.0 PR -- as I've done each ride so far. 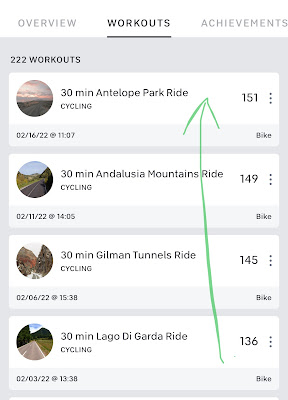 Not sure how long I'll be able to keep the streak going.  Today was tough.  For all these scenic rides, I turn the Peloton music off, and play Hirschmilch Radio Chillout on my Sonos Move in the sun/plant/bike room.  What's a sun/plant/bike room?  It looks like this: 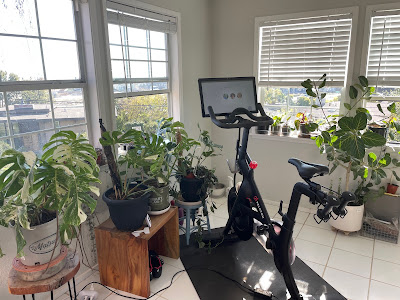 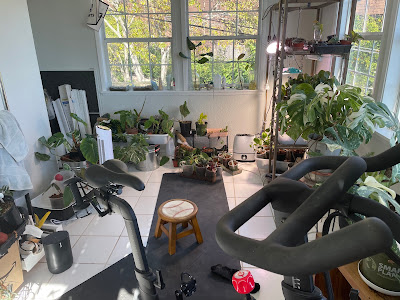 The rest of Heather's awesome jungle

You can see the Sonos Move in the second pic.  Placing it right behind the bike fills the room nicely with sound.  The first pic is a little washed out.  Here's an earlier pic (before the jungle arrived) that shows the view of the Loch Lomond Marina and the Richmond bridge. 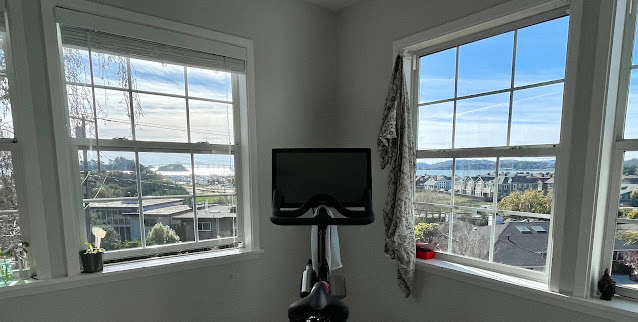 Talk about something to be thankful for... being healthy enough to ride the bike with this view?  Yeah, that's gratitude.  Someday I'll get back on my regular bike, but not yet.

1) I love 90% of the music -- it's the perfect blend of energy and chill, and it's mostly instrumental.

2) The bpms of the tracks vary nicely in the 80-120 range, with most between 90-110.  Why does this matter?  For non-Pelo riders, it's all about biking to the beat of the music.  If a track is 90bpm, you could bike at high cadence (90) and low resistance or you could bike at half the cadence (45) and a much higher resistance.  The former gives you cardio, the latter is all legs.

3) The tunes are reasonably (but not too) short -- 5 to 8 minutes on average -- there's a few seconds of down time between songs, and most songs start gradually with the beat often not being defined for 30-60 seconds.  This allows for a natural "recovery" between songs.  i.e. turn the resistance down (zone 1), drink some water, and catch your breath.

Here's the graph from today's ride. 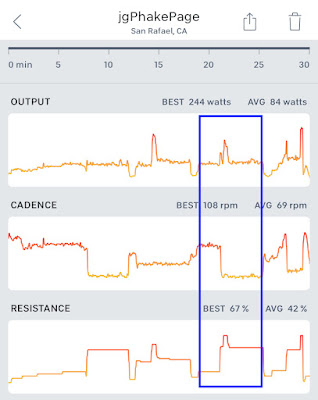 Around 1/3 of the way through the highlighted section, I decided to cut the cadence in half (from 90 to 45) and up the resistance mid-song.  The output stays relatively constant (except during the transition itself since I increase the resistance first.) You can also see the "recovery period" on the Output row just before the blue box.

OK, I didn't think I was gonna geek out so much on the bike thing, but there ya go.

Now, if all this wasn't enough, both kids broke their pinkies (in unrelated accidents) recently: Floyd on an unfortunate rebound at basketball practice and Orion running around with his friends (in the dark) and taking a tumble.  Floyd's is worse.  It's on his throwing hand.  He's on the DL for 6 weeks, then he can resume sports while he does physical therapy.  Orion's is just a little buckle break on his catching hand and should be fine in 4 weeks with no PT. 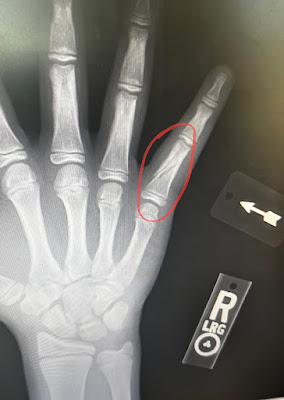 So it's just been a lot.  Now I know my (and our family's) struggles are nothing compared to what a lot of people in the world are dealing with.  We live in an amazing place, have top notch medical care, and an incredibly generous and supportive community -- props for drivers and MealTrain'ers below.  Still, everyone's struggles are real and these past few weeks haven't been easy.  On top of all this, despite the slight uptick in Peloton output, I don't feel like my energy has increased this week compared to last.  I guess that makes sense as we haven't reduced the Tacrolimus in a while.  Hopefully at my next appointment, the Tac level will be high and We'll reduce from 1.25mg to 1mg.  Every reduction in Tac means more energy for me.

So when is my next appointment you ask?  It's actually tomorrow (Thursday.)  I'm going to UCSF Parnassus but instead of going to clinic, I'm going to the COVID test area on the first floor.  They're going to administer a PCR test -- the results of which should only take a couple hours -- and then someone from the Infusion Center is going to come down and draw my blood right there.  After which, I can go home and have the follow-up visit with Lisa -- where we meet via video.

Now for some acknowledgements.  Firstly, absolute huge thanks to Tamara and Mark who brought the equivalent of 2 or 3 dinners and all kinds of desserts and treats for our Anniversary on Monday.  They really went over the top.  I wish I had taken a picture of everything.

I want to also thank everyone else who has brought (or will bring) over food -- either via MealTrain or otherwise -- and everyone who has provided rides for my UCSF appointments.  As my 5th grade teacher used to say, "you know who you are!" I seriously don't know what we'd do without your help.

Speaking of food, the warm spell last week must have made the chickens think it's spring, because the ladies have been layin up a storm.  I think we've collected 3 dozen in the last week and a half. 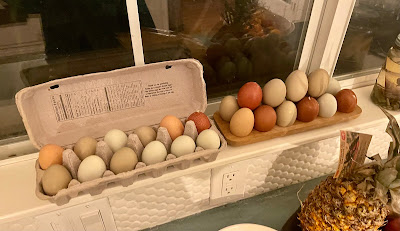 6 hens-a-layin
I feel like I'm leaving out something important, but I'm fried, so I'm gonna press publish and hope that the "lobstah" (courtesy of Gramma) actually comes before 8:00p, like the FedEx site says.
Oh right, H and I are binge watching Mare.  Can you binge watch a series that only has 7 episodes?  I guess you can.  Don't ask me how I haven't watched this yet.  I have no excuse.  We're only 5 episodes in, so no spoilers.
iwkia...a
Email Post