2021, Christmas Eve, With a Full Moon Over Town

First some football talk.  Major thanks to Travis for hooking me up with his SlingTV East Coast feed (with record/playbook hack) so I could watch the Eagles/WFT game in HD on Tuesday.  Had the Iggles on my lappie and the NFC West game on the room TV. 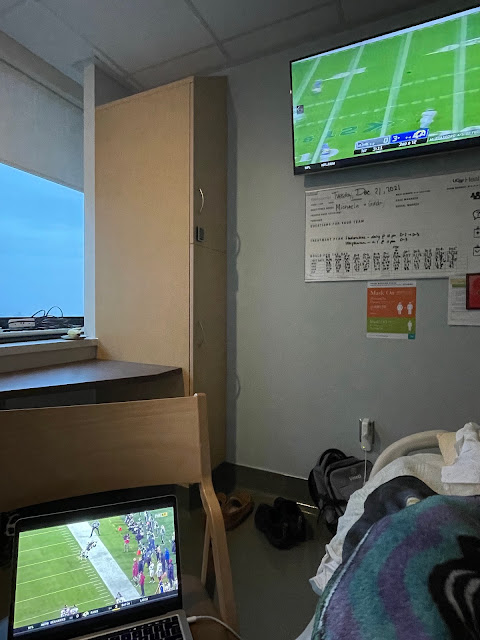 Yup! That's a catch!
This really helped lift my spirits as Tuesday was the worst day so far in my UCSF stay.  I had excruciating stomach pain, and couldn't eat a thing.  I didn't shower... I didn't even leave the room for my daily walk around the floor.  I was really worried that this is what my next week would look like.  Fortunately, Wednesday was much better, and despite my counts being at zero, I'm still feeling ok: incredibly tired but stomach problems regressing, thankfully.
Here are the Day -8 counts.  As you can see, my platelets are in single digits.  That means I have to get a transfusion today.

In fact, they are bringing in the bag as I type this.  Now we just wait for the counts to recover.  That could be on Day +12 or as far out as Day +16 or +17.  We just don't know.  Once they start coming up, I can leave the next day or two days later.
Back to football.  On the heels of the Eagles win (and the Niners choke), the NFC Wildcard hunt is a mish-mash of unworthy ~.500 football teams (Iggles included....) But hey, I'll take it.  If the Eagles win their next two, there's good chance they'll get in.  Not bad for a 1-4 and 2-5 start.  One you're in, anything can happen.
Big Kudos to the Jasik laundry service!  Benji has not only the best UCSF parking service, but he's been kind enough to do laundry for us, so I don't have to wear the stupid hospital clothes.  Great to see you, yesterday, ol' buddy, ol' pal. 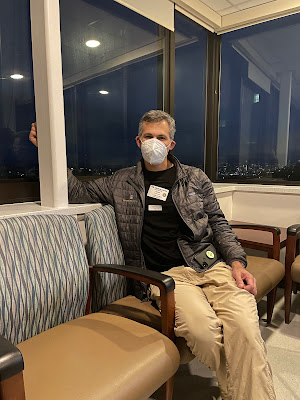 So what does Christmas eve have in store for me?  Well, the hope is that H can bring some frozen or "just add water" Chinese food.  Even when I'm neutropenic, I'm allowed to have frozen stuff (like Trader Joe's) or preserved-just-add-boiling-water soups. Chinese food on Christmas Eve (and/or Day) is a long-standing tradition for this Jew and it certainly would be comforting even to have some fake wonton or hot/sour soup.  We'll see how it goes.  What else?  I dunno, maybe the annual screening of Trading Places?  A little more music?  And rest.  Lots of rest.
Happy Holidays and much love to all.
iwkia...a
Email Post