Skip to main content
The next LLS fundraising event is THE BIG CLIMB on 4/30/2022 at Kezar Stadium, just down the hill from where I received my stem-cell marrow transplant in San Francisco. Both the Team Greene page and my personal fundraising page are live. Please visit these pages for more info on joining our team or supporting our effort.
Posted by jg November 28, 2021

I'll Be the Hero You're Dreaming of

After "Platelet-gate" last week, I just had to take some time off from blogging, but now it's time for the post-Thanksgiving, pre-next-phase-of-the-journey update.

One more thing about Platelet-gate... and y'all won't believe this... turns out, I would have been 100% fine without the transfusion.  That last blood draw they forced us to do before the transfusion?  It revealed that my platelets were at 15.  Meaning... they went from 9 to 15 from 2:00p to 10:00p on their own.  Continue that trend overnight and they would have been well over 20 by morning.  Had I seen the 10:00p results, I might have aborted the transfusion, but what can you do?  (And yes, they've rocketed to 100 by now.) So on to bigger and brighter things...

We're now less than two weeks away from my admit date and this Thanksgiving break couldn't have come at a better time.  I really needed to detach, refuel, and get my head ready for this next chapter.  I wasn't feeling great last weekend -- maybe I picked up a bug at the ER? -- but as the week went on, my energy rose consistently... to the point where yesterday I decided to try a mildly-strenuous hike with the kids... and it was epic.

They wanted to go to Turtle Rock (Ring Mountain), but since it was so clear -- and the visibility seemed really good -- I decided on the Slacker trail off of Spencer Ave... and it was definitely the right call.  Here are a few pics. 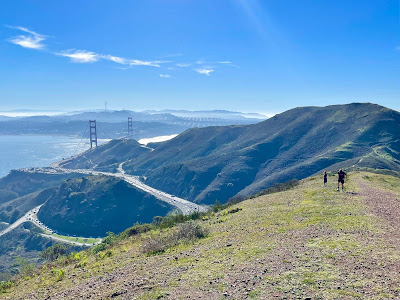 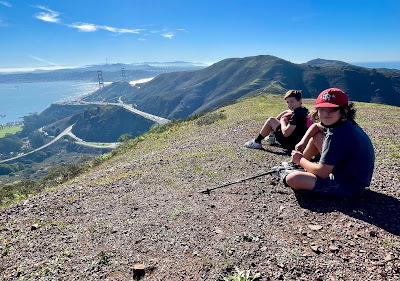 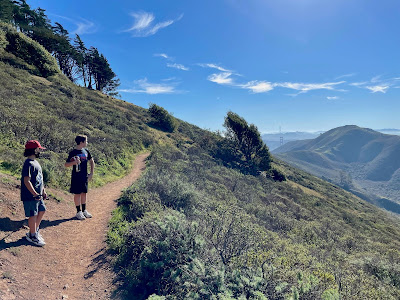 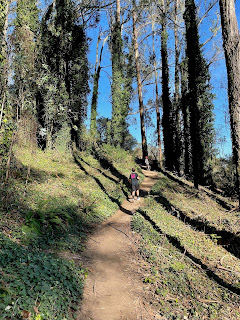 I really had no idea if I was going to be able to do it, and my pace was definitely slower than theirs, but they were patient and we had a great time.

Afterwards, we went to the Marin Brewing Company for lunch.  The Larkspur Mart was hoppin' with the Farmer's Market and a dippy band playing mostly Christmas tunes.  It almost felt like things were "normal."

Working backwards in time, Thanksgiving was absolutely perfect this year.  We've gotten the same group of friends together for the last several years with great friends Gina and Valon hosting at their place.  This year -- since our kitchen is still a war zone -- we decided that I'd bring some amazing wine instead of a dish.  This kind of occasion is exactly why you save these bottles. 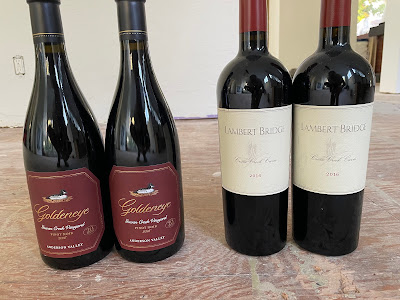 Golden Eye single vineyard for pre-game and the Lambert for dinner
This year, it was six families -- each with two kids around the same age.  As usual, the kids ate first, then went off to do their thing, and then the adults sat.  Of course, after dinner, I played piano while we all sang along.  I played a bunch of stuff I'd never even attempted before (e.g. Gold Dust Woman, You Make My Dreams, and Dancin' in the Dark.) Highlights of the night?  Scarlet Begonias, Hello, Don't Stop Believin', Glory of Love, Brokedown Palace, Brothers in Arms, and Loving Cup. Glory of Love is surprisingly complex with a weird modulation after the bridge.  What an anthem!
You can see my plate in the foreground of the third pic. 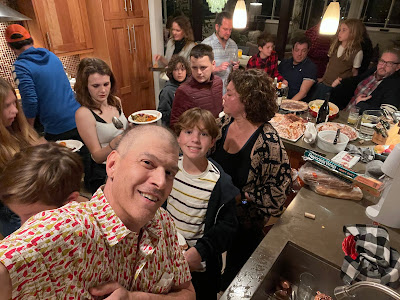 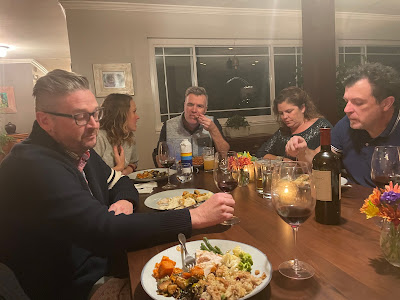 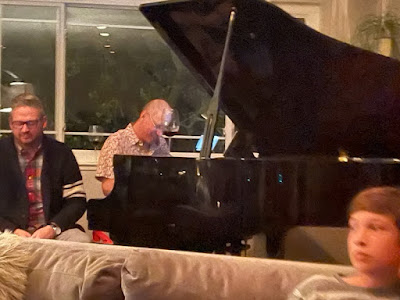 Oh, and Brandon organized a flag-football game before we all met for dinner.  I stayed home to practice piano. :) 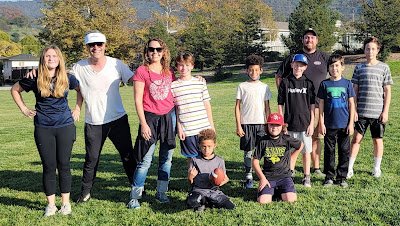 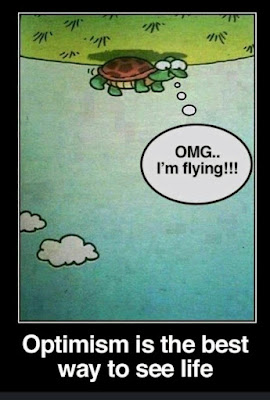 And... last but not least, the Vineti Armenia team sent us this lovely care package.  We had just assumed it was from Heather's mom -- 'cause she sends stuff like this, right Gramma? -- but it wasn't.  Thank you Lilit and team... very much appreciated.  Oh, and the eggs weren't part of it... those are from our chickens. 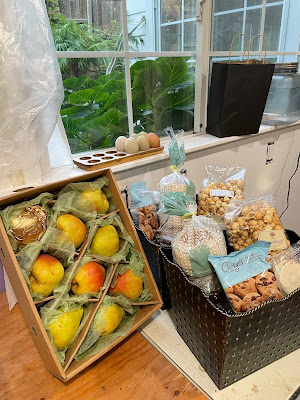 So one final day of rest and family time before real life takes over tomorrow: bone marrow biopsy at UCSF about 27.5 hours from now and lots of 2022 planning at work.  Can we get an Eagles win to start the day off right?  Time to get the kids ready to go watch it.
iwkia...a