It's Gonna Be a Long, Long, Crazy, Crazy Night

So, get this!  I’m sitting in my car outside the ER at Marin General.  Why?  Well, this has been the week of the Ara-C induced platelet nadir.  On Monday my platelets were at 4.  We found this out on Tuesday morning, so I needed a transfusion asap.  Fortunately, they got me into the “outpatient infusion” floor at Marin General.  I affectionately referred to this as “inpatient outfusion.”  They were confused by this, but got me my platelets nonetheless.

For those who don’t know, platelets only live in the body for about 10 days, so if your bone marrow isn’t making them because, for example, the Ara-C chemo from two weekends ago killed all the cells that make platelets, then you essentially need transfusions every couple/few days until your marrow starts doing its thing again.

Since my counts probably won’t come up for another few days, we were pretty sure I’d need another infusion on Friday.  So this morning my friends at Marin Cancer Care tried to schedule me for Friday, but “inpatient outfusion” was completely full, so they scheduled me for Saturday morning.  No big deal, right?  Well, we did labs today and my platelets were at 9.  Anything under 10 is insta-transfusion-city, and my team confirmed that Saturday was too long to wait.  So they called in my platelet order to the Marin General ER and asked me to head over.

Well… absolute f*cking nightmare.  The waiting room is packed... there's exposure to who knows what, and even though we know what I need, I still have to go through the triage process.  You’d figure they’d just get me through quick, right?  Well, turns out they actually tried, but when they called “John,” some old guy got up and went back.  I figured if he wasn’t the right John, they’d send him back and call me.  Well, he wasn’t the right John, but they just took him and didn’t call me!  After another 30 mins or so, I go the admissions person and ask what’s up?  He was like, “they didn’t call you yet?”

Anyway, fast forward 30 minutes… I go through triage and they say it's going to take some time to get me a room.  I’m now sitting in my car -- to avoid waiting room coodies -- waiting for them to call me.  It’s 7:24p.  I got here around 5:15p.  I’m honestly thinking about going home and just coming back in the morning.  The whole thing will be so much smoother.  Of course, the longer I sit here, the longer sunk-cost bias sets in, and the more I feel I should stick it out.  The other problem is that I have a bunch of stuff I want to do tomorrow including attending a key strategic work meeting and a get-together with the Chum guys for a little jam session in the studio — likely the last one for a long long time.

Worse, even though I have bars, it seems I don’t have any cell service.  So I went back in to tell them that, and the guy asked what kind of car I had and where I was parked, and said he’d come out to get me when I was called.  But they aren’t going to yell my name out like I was in the waiting room, they are going to call my cell.  How is he going to know that?  Even worse, I can’t post any of this until I either get called back into the hospital and get on the WiFi or I decide to bail and go home.

Gonna head back in there and see what’s going on. If they aren’t ready for me, I think I’m going to bail.

OK, well, I guess it just is what it is.  I talked to the charge nurse who basically said it won’t be any better to come back tomorrow morning.  Everything is full in the hospital, so the ER is overloaded.  And even though I *might* be fine until Saturday, anything lower than 10 is pretty dangerous, so they want me to wait, and they are doing all they can to get me into a room.  When I said I’d be happy to sit in a chair in the hallway, they said "all the hallway chairs are full."  Yeesh.

So now I sit here and wait.  What happens if I have to pee?  Good thing I have some jerky beef and a few Kind bars.  I have a feeling it’s gonna be a long, long, crazy, crazy night.  Closing lappie for now.  Will resume once the platelets are flowing.

Well, at around 8:00p the triage nurse coming off her shift called me — I guess the cell service got better! — and told me that they had identified a room and had to clean it.  Well, it’s 8:34pm and still no room.  At least I’m sitting inside and am reasonably isolated (and warm.)

9:30pm.  In a room.  Got an IV.  Platelets ordered.  If we’re lucky, they’ll be here by 10:30p.  Then an hour for the transfusion and I’ll be home around midnight.  I guess it’s really good that I didn’t wait until tomorrow morning to come here.  All in, this ordeal will be 7 hours.  That would have completely destroyed my Friday.

OK, a few other things before I click “Publish”.  First of all, major props to my former co-worker and Loch Lomond neighbor Todd for delivering not one but two majorly awesome Meal Trains this past week. Up until now, it's was Xantha's Chicken Adobo that boasted top billing -- might still be #1 when all the votes are counted -- but Todd rocked the lasagna + garlic bread + caesar salad last week and the followed up with a double dose of pulled pork: sliders and street tacos this week. Sorry for the kitchen mess shot, this is the only pic I took: 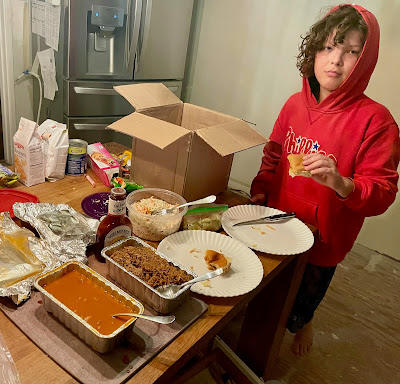 Next, ya gotta give it up for Loftie for sending a quintet of awesome winter toques.  Only the 4 Philly ones are pictured here.  I gave Floyd the 5th one, a US Soccer toque.  These things are super soft and really keep your head and ears warm! 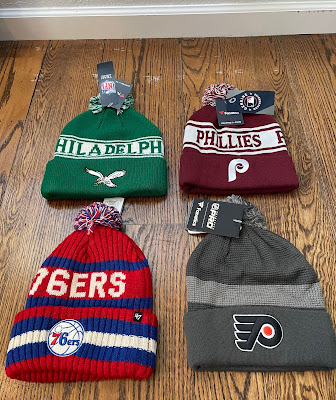 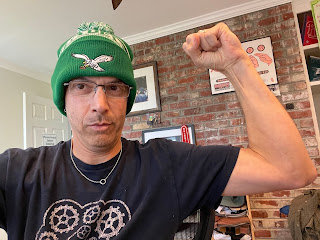 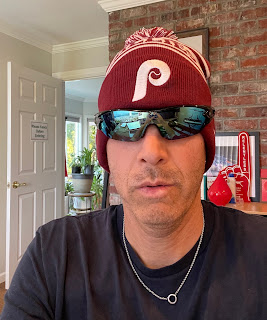 My brother got on the hat bandwagon too and sent two strange but cool Iggles caps for the boys.  Turns out these are made by the sister (Courtney) of a high school buddy of mine (Keith).  Small world. 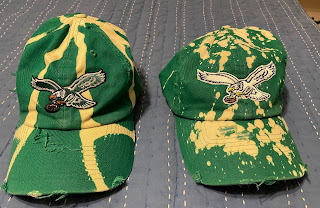 Last but certainly not least, check out this stash of pre-donor gear that Martin got for his leading-up-to-donating-stem-cells prep.  More on his donor stuff we get closer to his donation date: Nov 30th 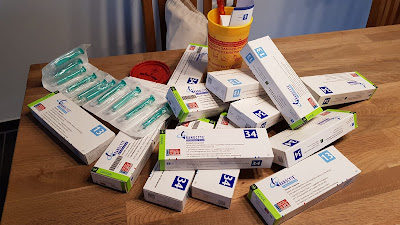 Oh for the love Pete, NEVER AGAIN this ER.  I'd sooner drive to San Francisco than deal with what's happening right now.  Turns out they can't even use the labs (blood work) and typing from this afternoon because the ER codes don't match the clinic codes.

So here I am at 10:00pm and now they are going to have to draw new labs, get the processed, and THEN we'll be able to get the platelets.  It's going to be a 5:00p to 1:30a visit.  And lord only knows how much extra out of pocket I'm going to pay because this is all ER.  Farrrrrrggggggg.