Your Hip Bone Connected to Your Back Bone

Successful Bone Marrow Biopsy (BMBx) completed Monday.  Lower back (at incision point) is still a bit sore, but not nearly as bad as the one from Marin General 7 weeks ago.  In fact, everything, about this BMBx experience was better than the one from Marin:

but most importantly
The actual bone marrow removal -- once the drill gets the needle in the bone -- isn't pleasant no matter how they get in, but of all the BMBxs I've had to date (5? 6?) this one was probably the least uncomfortable.  Or, who knows, maybe I'm just getting used to it.
In terms of results, Dr. Damon said that preliminary information should come in today or Thursday at the latest.  More details to follow in a week or so.
They did a blood draw before the BMBx.  I don't think I've ever seen then fill this many tubes!  It's so stupendous. 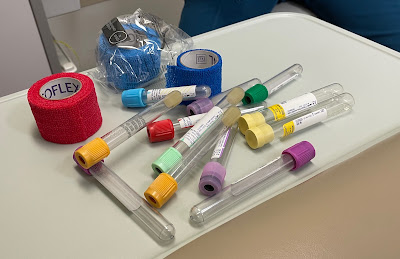 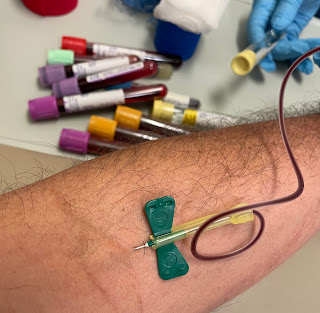 My counts are still looking good.  While the Neutrophils and the WBC are both lower than my discharge date, they are still within normal range.  And speaking of normal range, I don't think my platelets have been this high in over 10 years.  Normal range is 150-450. 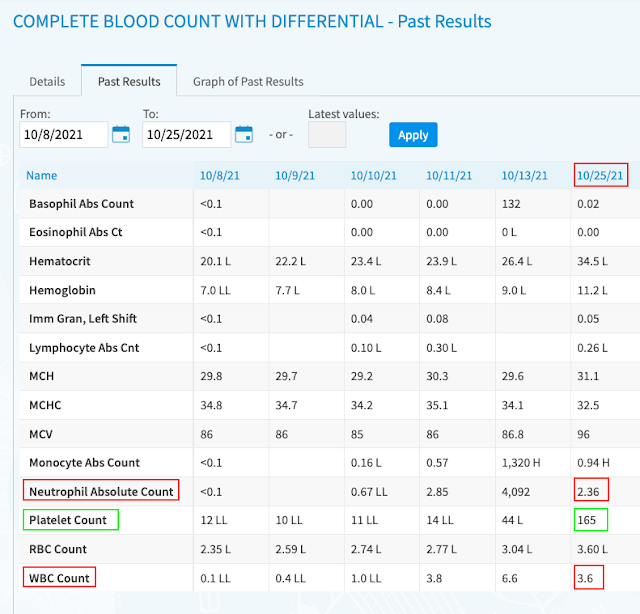 When I got back from the BMBx -- I refused pain meds other than Tylenol so I just drove myself -- Katniss was sitting in my work chair... eye boogers and all.  Clearly, she was wondering where I was. 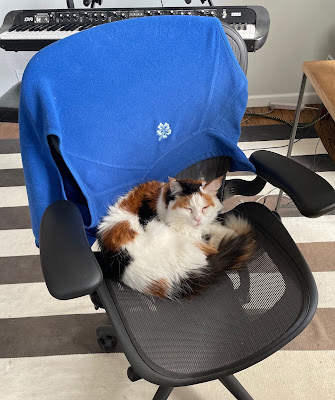 So where do we go from here?  Martin heard from DKMS that "collection" -- i.e. when he donates his stem cells -- will be on 30-Nov and/or 01-Dec.  In the past, this would mean that my transplant would be scheduled for 02-Dec -- which would mean getting admitted the Saturday or Sunday after Thanksgiving -- but according to Dr. Damon, "Martin’s stem cells will be frozen and shipped here (a work flow developed during the COVID pandemic) which then allows us leeway in the timing of admission and transplant." So I'm guessing the transplant will be more like mid-December.
So what does that mean in terms of recovery time-frame?  It's totally unclear.  We're in uncharted territory.  Roughly, we could map the progress from Apr-2011 to mid-Sep 2011 to see what recovery might be like, but -- for myriad reasons -- we have zero clue if it's going to go anything like it did the first time around.
What else?  The war-zone in the house (aka kitchen remodel) is in full effect.  Sorry, no pics... it's just too crazy.  Really, I've just been working like crazy, trying to get a little exercise in every day, and making sure I get enough rest. I really want to get in the pool for some light exercise but not allowed until tomorrow: 72 hours from BMBx.  We're shutting it down for the winter in November so only a week of pool left.  Here's what the pool looked like during the morning of the bomb cyclone / atmospheric river (Sunday).  Had to clear a ton of debris, but incredibly, it didn't overflow. 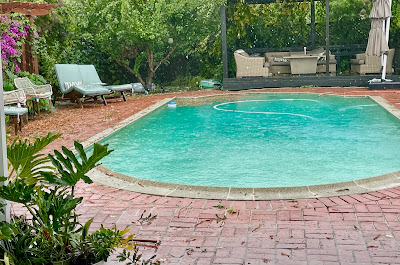 Last thing... The San Francisco virtual Light the Night walk is tonight!  Thank you everyone who donated to Floyd and Orion's fundraising campaign.  We just hit $40k.  Amazing!  Someday we'll cure this shit.  In the meantime...
iwkia...a
Email Post