So Fast This Expedition, So Vast This Heavy Load

Not sure why I was in the mood for Yes, this morning, but this shuffle is the perfect match for my mood.  So many Yes songs have uplifting energy.  It's not necessarily the lyrics; it's more the (amazing) music and Jon Anderson's voice.  So yeah, Yes energy matches how I'm feeling... I'm feeling pretty good and excited about where we are.  Read on and you'll see why.

This post -- as I imagine most Monday posts might be going forward -- will be a long update.  So if you don't have a lot of time now, come back later when you do.  :)

Before we start going deep in counts, fevers, and travel baseball, I want to highlight something: one of the Vineti crew got me the greatest present.  It's this pair of Bombas Slipper Grippers.  Half slipper, half sock, these things are literally perfect for a hospital room.  She even got a pair for Heather!  Thanks, Birchie! 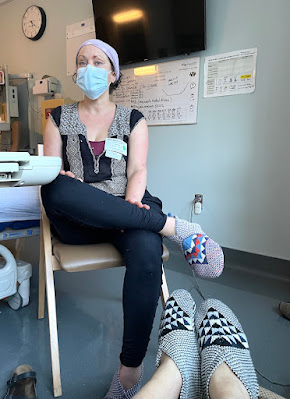 OK, so where are we on the health front?  Today is Day 17.  I'm going to start putting the Day # in the header at the top of posts to make it easier.  That means we've been done with all chemo for 3 days.  The vast majority of the chemo was done in 7 days, but unlike traditional 7+3 induction, my regimen -- FLAG-IDA plus venetoclax -- includes 14 days of venetoclax.

The FLAG-IDA plus venetoclax regimen is new and it's pretty intense.  One thing that sucks is that venetoclax wasn't really designed for this use and therefore isn't available in IV form.  For the first 7 days I had to take 4 big pills a day on top of everything else.  That's not easy to do when you're constantly nauseous.  The compozine only helped so much.  So glad the first week+ is over.

Now we're done with all that and now it's just a waiting game.  What are we waiting for?  Well, ultimately, we need the ANC (absolute neutrophil count) to come up to (or start approaching) 1.0.  It's intentionally < 0.1 now.  That's what the chemo does... obliterates all the white blood cells (WBC) of which ANC is a subset.

Random: Nice! South Side of the Sky just came on.  Always loved that tune.  I remember in 1988 or 1989 seeing a band at a UMass house party and they played this song... I hadn't thought about that for a long time, but looking back -- I think they were called Hoobis Doobis... is that right, Matty? Jackson? -- they, and in particular the keyboard player, really inspired me to want to play more.  Who knows, without my seeing this deep cut song covered live, maybe there would be no yeP! and no Chum.  You just nevah evah know.

So here are my complete blood counts (CBC) as of today:

Of course, I still have to take a ton of pills, get red blood, platelets, IV drips for various anti-biotics, anti-fungals, a nupogen shot every day, and who knows what else -- annnnnnd of course the marinol -- but now we just hope things are uneventful.

I'm also doing laps around 11 Long every day (and other light exercising), trying to consume at least 1200-1500 calories -- I made that range up -- a day.  It's not as easy as it sounds, but the marinol is helping tons.  There's a spinning bike on the floor too.  Not feeling up to it yet but maybe some real light riding later this week.

For the past few days it's been anything but... I've spiked 3 fevers over the last 4 days.  You really don't want any fevers.  Since, while most turn out to be innocuous, if the root cause is something bad, it can kill me as antibiotics and anti-fungals can only handle so much.  Fortunately that finger problem -- did I spike a fever for that? -- seems to be about 90% fixed.  Whew.

So it's really gonna be a lot of me sitting in this chair for most of the daylight hours, mixed in with getting vitals taken, talking to docs, the aforementioned exercise and hopefully feeling relatively good.  The room gets direct sunlight -- but only if you're sitting right against the window -- from about 8:00a to 4:00p this time of year.  I may not have the view of the bridge, but I got sun and it's nice and warm! 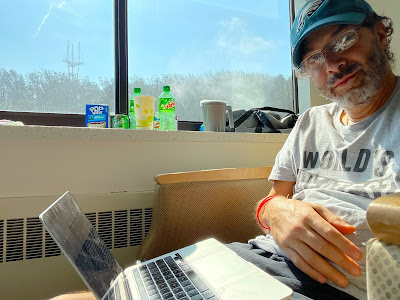 It's weird though... when the sun retreats, the room cools very quickly and I get cold.  For two (or is it three?) out of the last four nights, I've bundled up with fuzzy pants -- thanks for bringing them, love! -- hoodie, and beanie, but I'm still cold.  Of course, in both cases, it was the fever brewing.  Fortunately, all related tests and cultures have come back negative.  Hopefully no fever tonight!  Regardless of counts, I need to be fever-less for a while before they'll send me home.  Of course when the counts finally rise, it means the immune system is coming back so hopefully it will take care of whatever causes the fevers.
OK, let's shift gears to the incredible weekend that was for the Greene boys, their Stings tourney in Sunnyvale, and how I got to experience it.
Before we get to any of the actual ballgame stuff, I want to recognize Heather for being an absolute baseball super mom, ensuring that both kids got to their games -- sometimes at different fields! -- on time and ready to play, and just overall rocking the weekend. Great job, love!  And huge thanks to the various Stings parents who drove Floyd and Orion around.  It really does take a village, and this Stings Family is the real deal.
So over Saturday and Sunday, Floyd (Stings 14U Grey) and Orion (Stings 12U Steel) played a combined 9 games in the 14U AAA and 12 Open brackets respectively.
Orion's team won their tourney and Floyd's team lost in the championship game.  It was their third game of the day but only their opponent's second game.  In the semi-final game Grey, playing their second game of the day, knocked off the 1 seed who was playing their first game of the day.  In the final, they played great and even brought the tying run to plate in TOP7, but ultimately just didn't have the gas in the tank. Earning that bye is so crucial.  Here are the final brackets:

CONGRATS to both kids for an awesome weekend.  And thanks to some great parents, I got to listen to and follow all the action on Game Changer.
Note in the 12U bracket the West Coast Federals scored 21 runs in the first game (against the other Stings 12U team -- eep!)
[Blog break - 30 minutes of laps - Grateful Dead 3/31/89 Set 1] 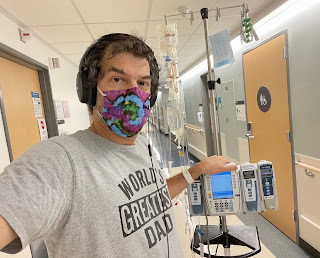 OK, back.  Here are a couple of pics of Orion, his team, and their coach: 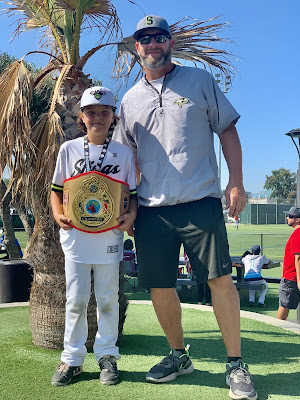 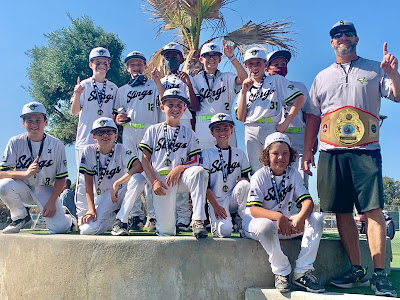 In the semi-final, Orion led off BOT 6 with a base hit that got everything started.  He later scored the tying run and the momentum shifted for good before the game ended on Cobe's bases-loaded walk-off walk.  The comeback (against a very good team) was remarkable. 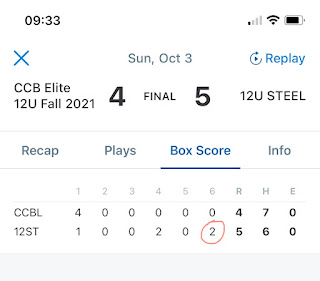 That BOT6 rally and win led to the final game where the Steel won 1-0 on an amazing pitching performance by Ben who got the complete game shutout, striking out 3 and walking 1.
So what was my experience like following these games?  Thankfully parents from both squads stepped up to run GameChanger.  Simply, GC is a platform that allows someone at the game to "score it" live in a way that lets fans (parents, grandparents, etc) follow or even listen to the game (via Siri and some sound effects.) It's actually very compelling.  Here's a little 30 second promo vid for GC but they don't show the audio function.
Throughout the weekend there were two occurrences (Sat at 2:20p and Sun at 8:00a) where both boys' teams played at the same time.  My setup for that looked like this: 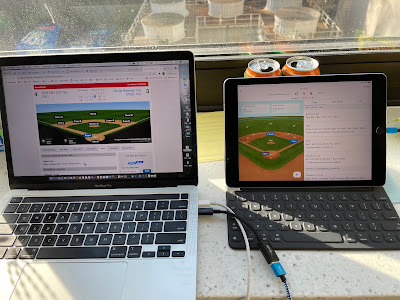 Steel on the lappie and Grey on the iPad with audio play-by-play enabled.  See the little sound icon at the bottom?  Fortunately GC doesn't care how many concurrent logins you have.  Or if it does, I haven't hit the limit.  3 is the most I did. :)
While Floyd's team didn't win, they played great and Floyd rocked it on the mound including 3 perfect innings in the early game on Sunday.  9 up, 9 down.  He had the curveball workin.

Here's a pic of the ace warming up. 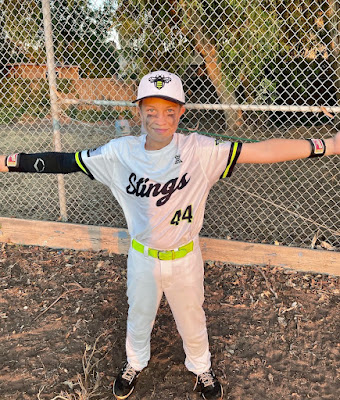 Later in the day, he pitched again, and Heather recorded this awesome video of a perfectly executed cover home play.
I can't describe to you how awesome it was to experience these games like this.  Not being there breaks my heart, but GC makes it all better.  Thanks Josh, Michael, and Glenn.
Here's the post game pic of the two boys.  They worked HARD.  So proud of them and all the Stings players, coaches and families. 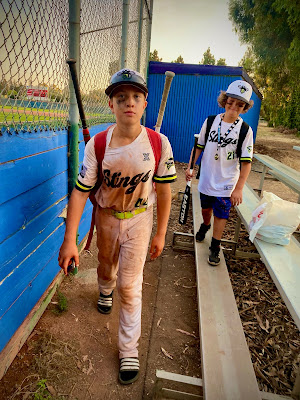 So that's what going on.
Oh, I almost forgot.. during all the GameChanger madness on Sunday, Brown was here for several hours as we watched the Eagles lose, Giants clinch, and little of the afternoon games: Niners/Seahawks and Steelers/Pack.  NFC West gonna be tough this year, Niners fans.  But y'all're better than us.
Brown brought pop tarts and Mountain Dew.  What a guy! 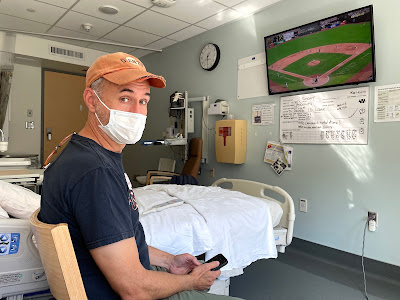 The big plans for this week?  Two things:
1) I need to get a keyboard in here.  I'm feeling well enough that I think I can probably play for an hour a day or so.  I need to do this for so many reasons.  Working on it.  Update soon.
2) Playoff baseball.  I'll definitely be watching a lot.  Maybe we get in on some action... whaddya say, Travis?  :)
Well 3... and it's obviously more important than the two above: get plenty of rest and be super careful to minimize the chance of any infection.
OK, I'm sure I'm forgetting stuff or have lots of typos, but I promised myself I'd publish this before MNF started so here I go.
iwkia...a.
Email Post