Why isn't it Friday today?

So after some good times at the Kezar with Brown, pcal, Eric, and, Benji, I finally hear from UCSF, but instead of telling me to come back for admittance, they tell me that it's going to be Friday.  So I ordered more wings and a boatload of tortilla soup to-go and arranged a ride back to Marin -- thanks, Auntie Laura!

Don't ask me why/how, but they couldn't get the Phillies game on TV yesterday afternoon, so I missed this insane comeback: 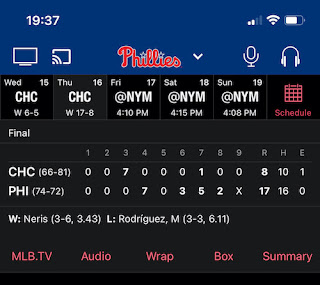 Not that it's going to matter... the Braves will probably win the NL East and lose to the Giants in the first round anyway.  But damn, Bryce is on fire.  Ya nevah evah know.

So I got one bonus night with the fam, another good prime time NFL game -- even though the "Football Team" didn't cover, and most of our props went south.... way to go, Travis!  ;) -- and a nice (though not all that restful) sleep in my own bed before this crazy ride begins (again!)

As I write this, I'm waiting to hear from UCSF about admission time today.  Hopefully it'll be earlier than later, as I assume that they're going to want to put in a PICC line and do all the other stuff they did when they admitted me in December 2010.

The good news is that they re-ran the bone marrow scan and -- if I'm interpreting the results properly -- found literally hundreds (if not thousands) of 10/10 matches.  So now of course the big question is, how do they decide who to use?  Several people have asked questions like: "Can you just get cells from Martin again?" There are a few factors:

If I knew for sure I'd get another 10+ years -- not that that's guaranteed with Martin or anyone else -- I think I'd take that vs going for door #2 or door #3, you know? It's like, do you keep the $500k or go for that $1mil question with Regis Philbin.
We have some time to figure all that out because we need to achieve a remission before a BMT/SCMT is even possible.

Ooooh, message from UCSF just came in.  Let's see... nope.  Not about my admission.  I'm gonna call them.

More once I'm there.