I'll PICC you up at Eight as Usual...

Yesterday late afternoon turned real weird, real fast.  I started to get cold and had to put on my hoodie, which I haven't once done in the (almost) two weeks (!!) I've been here.

It didn't really help... I was still cold.  So I called the nurse to take my vitals... no fever, so what was going on?  Also started to develop some non-trivial neuropathy but only in one finger -- middle finger, right hand.  It felt so numb that I couldn't even type with it.  That finger also is very sore in the bone.  Feels like I jammed it or something, but I didn't.  Ah the strangeness(es) of this treatment.

Eventually, the coldness subsided, but then I spiked a 38.7C fever a couple hours later!  I guess it was starting when I got cold.  As many of you know, anytime you get a fever they have to do all kinds of tests because the root cause of the fever could be fatal for someone with no immune system.

One of the things they do is a chest X-ray.  It's pretty amazing that they can wheel this massive stocky machine into the small room and get it all done without my even having to get up.  So what did the chest X-ray reveal?  Nothing wrong with my lungs, but it showed that the tail of the internal PICC line had moved/drifted from where it should be -- in the "superior vena cava" -- to (the much smaller) azygous vein.  No wonder blood draws had been much slower yesterday! 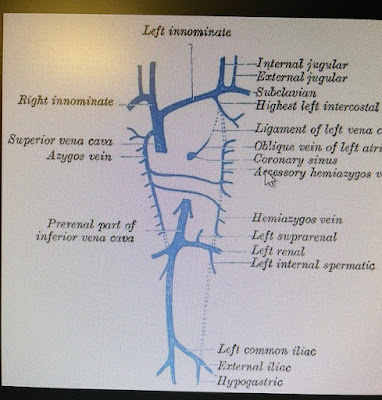 Oh, they also took a urine sample (which turned out clean) and sent out blood cultures, but those'll take 24 hours to come back.

OK, so what do we do about the PICC?  Well... there's short term and medium term.  Short was last night.  I needed IV antibiotics because of the fever -- not to mention the usual 5:00a blood draw this morning -- so Kelsey disconnected the PICC and did another prick (in my the other arm) and secured it. 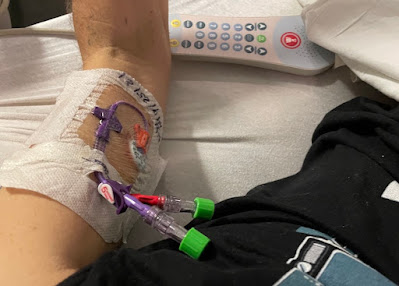 Here's the new addition to my right arm: 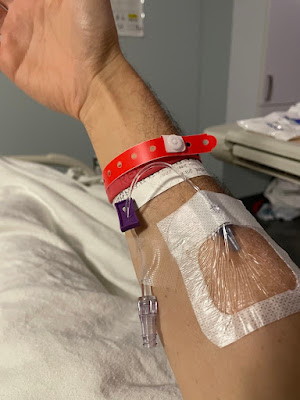 All good, right?  I even got to sleep a night being completely disconnected from the Trans-PAL... so I could actually move my arms wherever I want!

Not so fast.  As if an hour+ with Kelsey last night wasn't enough, the right arm addition wasn't drawing any blood this morning.  Why?  Who knows.... probably just the way I slept on it.  This is why a PICC is so important.  Usually, they put it in and it's good for several weeks.  So she had to take out the right-arm prick and re-do it.  Yes, at 5:00a.

The problem?  Veins are much worse in the morning for stuff like this.  Whereas last night I had "awesome veins," this morning, we had to use a heating pad for 20 mins and I had to do the hand-squeezie exercise (without a squeezie toy) in order to get the vein primed.  Worse, my platelets are probably single digits, so there's all kinds of risks there.

Anyway, mission accomplished.  Here's what the Kelsey re-do looks like this morning hooked up to my Trans-PAL right now as I author this blog entry: 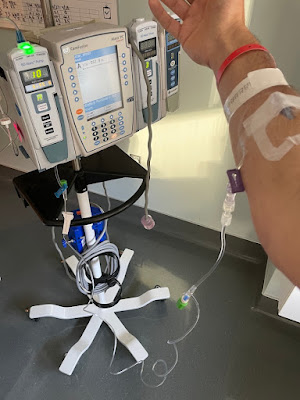 So we're good for right now, but obviously -- well, obvious if you spend 60 seconds reading that mayo clinic PICC link above -- we need the medium term fix to the PICC... that's happenin' soon.... s'mornin'.

Option 1: PICC team somehow saves the current PICC by moving/threading the end of it where it needs to go.

Option 2: PICC team takes this PICC out and puts in another one from scratch (likely in my other arm)

Option 1 seems preferable, but who knows if it's even possible or if it's the safest option.  Safety (goggles) first.  Right?  So they're coming to do another chest X-Ray now to see where the PICC is this morning so they can decide on a next course.  Platelets coming now too, but they're just going to do it through Kelsey prick #2, not the PICC.

Totally random.... since I was disconnected from the saline last night, I woke up thirstier than usual.  Imagine my surprise when I saw that "Gatorade (Orange)" was an option in the "drinks" section of the Meal ordering app.  And a throwback edition can to boot! 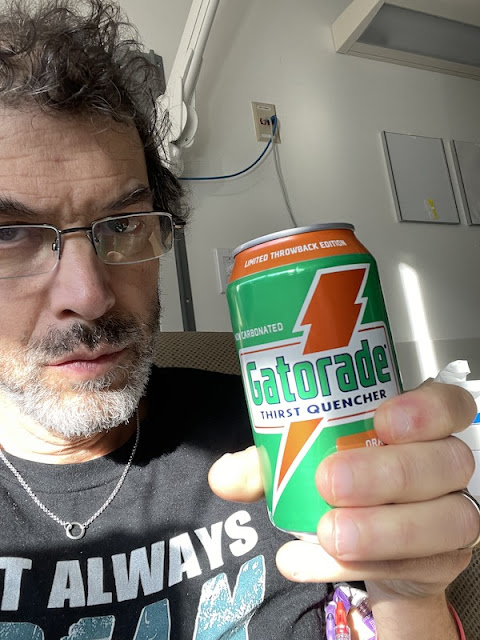 Finally... Phils loss last night was a bummer.  I really thought they were gonna take the lead in the ninth.  I wonder where they'd be if Rhys hadn't gotten hurt.  Ah well.  I really hope it winds up being STL/SF in the NLDS. That'll be a great series.  Prob pullin' for the Brew Crew though.  Right @Travis?

Oh, and I'll let y'all know the outcome of PICC Line-gate and platelet-gate a bit later.