Clap Your Hands if You Think You're in the Right Place

This will be the final update of the year, and quite possibly the last update for a long time. If you're a recent visitor, I suggest you start at the beginning, as the recent updates aren't nearly as interesting as the first two years.

Two years... almost 26 months to be more precise.  Seems crazy that I started this blog that long ago.  Back then, I was writing a couple-few times a week. It was a great way to let people know what was going on with me.  It also was a way for me to look my situation in the eye and consciously decide not only how I was going to deal with it, but also how I was going to present it to the world.  Also many AML patients have found it useful, which is fantastic.

Now blogging frequency has slowed to once every 6 or 8 weeks -- and honestly, it has become more of chore than anything else so I think it's time to stop... on one condition: things continue in the direction they are going.

The reality is, I'm on the road to being cured.  I saw Dr. Damon the week before last and he continues to be very pleased.  He was fine with the 0.3 tac, but was concerned with my lip (it's never really recovered from the April sunburn) so I might have to see a specialist if it doesn't fully heal -- hydrocortizone and Aquafor don't seem to be doing the trick.  I'm 19 months post-transplant.  The vast majority of relapses occur in the first 2.5 years, so I'm really not far away now.

My life is never going to be as "normal" as it was -- it's not about that.  The chronic GVHD will last for years (if not forever) but that's just part of the deal.  Sure I have problems with my lips, range of motion, cold hands and feet, slow healing, fatigue, etc.  And I'm probably 5x-10x more likely to develop all sorts of other crap than someone who didn't have leukemia... big whoop.  It's better than the alternative, right?  And progress continues. For example, I'm still not close to being able to extend my forearms 180 degrees when my palms are touching (so I can't do a push-up or plank) but I can get it to about 90 degrees.  That may not seem like much, but it was 60 degrees (or less) in the summer, so in a year or two?  Who knows.  I have no pain playing piano, throwing and catching a ball, shooting a basketball, typing, fill-in-the-blank.  Couldn't say that in the spring.  Maybe I'll even get to play golf again -- haven't played in years.  My favorite activity is skiing -- not sure when I'll be able to do that again... not this year, but I will do it.  I also want to bike all the way to work one day in 2013.  It's about 22 miles -- a stretch goal for sure, but I think I get there.

So, getting back to blog closure. What started out as something focused on kicking leukemia's ass has really turned into more regular life updates, pictures of the family, reports on work, etc.  There's nothing wrong with that; lots of people do it.  In fact, I have a great friend whose wife life-blogs about their family. I won't link to it, since it doesn't seem to be googleable and is probably semi-private -- you know who you are :).  Since I don't get to see them as much as I'd like these days -- they live in the city and we're up in Marin -- I can check into the blog and see what's been going on.  That's great, but it's just not for me.

I wouldn't say I'm super-active on Facebook, but I do post good pics from time to time.  So if you wanna follow that "life stuff" and we're not Facebook friends, go-ahead and add me.

I will still post concise medical updates here as I know there are readers who are predominately interested in the specifics of my recovery.  Or, if, heaven-forbid, something goes wrong, I'll post that too.  I'll probably still post pleas for contributions to upcoming Light the Night walks as well.

Barring that, my next post will probably be sometime in the Spring if I am able to make contact with my bone marrow donor.  Oh, that reminds me, one of my co-workers is actually being called to donate!  She signed up with marrow.org when she heard my story.  Check out this Chatter message I got last week.  So cool! 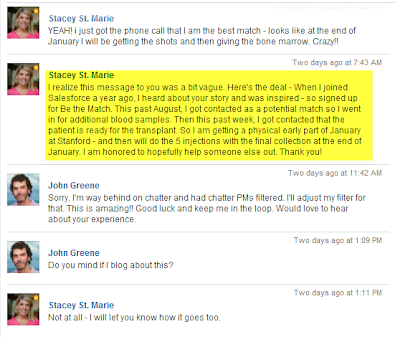 Anyway, here's a few more pics from Thanksgiving til now.


Hope you enjoyed the adventure until now.  Let's all look forward to FEWER blog posts in 2013.