Blogging tunes: none (in UC surgery waiting room and forgot my etymotics)

Quick health update and then we'll get to the fun stuff.  My appointment with my team this morning was good. We're gonna completely stop the IV Magnesium, which means we can finally remove my Hickman line. That will get scheduled for sometime next week or the week after. Apparently, they just kinda pull it out. Not really looking forward to the experience, but the result will be great -- I will finally be de-borgified.

My energy level continues to increase. I am taking longer walks, bike rides (more on this below) and sleeping less. I feel pretty confident that I'll be able to return to work soon. Based on my energy level this coming week (and how I do at the two Phillies@Giants games next weekend), I'll talk to Benji and HR, and make a decision about the actual date. Even before my transplant, I had September 1st in my sites. That's exactly 5 months from transplant and 4 months ahead of schedule. I'm going to do everything in my power to make that happen.

As I type this, I'm sitting in the pre-op waiting area at 505 Parnassus -- waiting for my lipthotripsy procedure (to bust up my kidney stone.)  I doubt I'll be able to finish the blog before I get called for pre-op prep, but I'll write as much as I can. It is friggin freezing outside. Probably 55 degrees with 20mph wind. No, I do not miss the city at all.

Shifting gears, two of my oldest college friends, Scott and Mary Beth, visited us yesterday afternoon and evening. Scott and I met at UMass Freshman Orientation, and wound up rooming together Freshman year. He introduced me to the Grateful Dead in the fall of '88 (and took me to my first show: Foxboro '89) and my life hasn't beem the same since. :) Mary Beth lived on our floor (in Pierpont) and so began their relationship. Hard to believe that was over 20 years ago.

As usual, it was gorgeous in San Rafael, so we loaded up the boys and walked (strolled) into town for the weekly Thursday night Farmer's Market on 4th Street. In addition to tons of fresh produce (of which we bought none) there were all kinds of food stalls, live bands, merchandise, and amusements for the kids like this big bouncy house:


It was fun for five minutes ($2) but Floyd could not get enough of this huge air filled slide. He probably did it 15 times -- good thing it was only $0.50 a slide.


Heather took a great video of one of his descents:


Floyd Slides Down video (HD)
Stupidly, we didn't got any pics of all of us, but here's one of Scott and Floyd from the ice cream place:


After we got the kids to bed, Mary and Heather went to Target while Scottie and I hung out and caught up. When the ladies got back, Heather convinced me to play some songs on the piano:

Strange Design*
Back on the Train
Standing on the Moon#


*Heather's favorite slow Phish song these days
#yeP! played this at Scott's wedding back in 1995


*** RED ALERT! Bloggis interruptus! It's lipthotripsy time. More tomorrow ***
Saturday July 30th
Blogging Tunes: Charlie Hunter - Natty Dread; MMW - Shack Man
Big thanks to Rob Woollen for driving me home from UC last night (sweet ride, dude!) Man, am I groggy this morning. The procedure was an apparent success, but the general anesthetic really slams me -- even the next day.  I'm very tired, a little sore in the kidney area, and have a bit of a sore throat -- I guess they put a tube down there. I don't remember anything. I think I was out just from the sedative they gave me.

Now I just need to take Flowmax and hope to pass the fragments without complications.

Anyway, back to the pictures and videos: check out this little video of Floyd whacking the whiffle ball. Right now it's all arms -- i.e. he's not stepping into it and getting the full body power. But this is a damn good swing if I do say so myself. He's a regular Hunter Pence, this kid!


Liner back to the mound - view in 720 full screen
In other news, Tuesday's piano set at Little Arrows was fun.  I got there a little earlier than usual, so I played for a good 70 minutes or so.

Hello Song#
Gumbo
Monkey & The Engineer >
Free Four
Two Little Kitty Cats#
Ramble on Rose*
Scarlet Begonias >
Light >
Fire On The Mountain
Us and Them >
Any Colour You Like >
Brain Damage* >
Eclipse
Looks Like Rain*
Goodbye Song#
*Kari on backup vocals
#From Music Together songbook
Speaking of two little kitty cats, we adopted a young cat (Bandit) from the Milo Foundation and are fostering his mom (Skye.) We're definitely keeping him and hope to keep her if they get along. In case you're wondering, they were already named when we got them. Floyd was bummed after Elvis died, and we really thought it would be nice for the family to have a pet. A dog would be way too much work at this point, so a couple cats sounded like the right move. When you have two cats that get along (a male and female is usually best -- like Elvis and Sonora: pic1 | pic2) it can bring some sweet, loving energy into the house.
Skye and Bandit are chilling in their kennel right now. Lemme see if I can get a pic...
OK, that was an adventure. I did manage to get a couple pics and a video, but it took me another 20 minutes to catch 'em both and get 'em back in their kennel.
Bandit - the energy ball
The garoffice, Floyd and Orion's "new" rooms, and two cats -- the place is really coming together.  Now that the office is completely contained in the garage, we were finally able to move the crib out of Floyd's room and into the other room. We also got rid of the changing/table dresser. Floyd's room seems huge, and Orion has his own space. Pics soon.
Quick thoughts on my Wednesday bike ride. I rode about 5 miles and felt about 10x better after it vs. my first bike ride back in June. I rode up the #5 bike path, exited to Lincoln Ave at the top of the hill, and rode down the hill to Ranch Road up to the base of the driveway of house that a friend of mine may purchase.
It was a killer hill just to get up there and another on to the actual house -- I chose not to ride up.
Oh, remember the Camp Doodles discussion from the Lieby story?  Here's a sign: 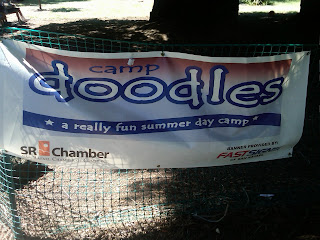 Maybe Floyd will go here in a few years?
The weather is so nice for walking and biking. Lest there's any doubt about how crappy SF summers are compared to SR (unless you live in the Mission, Potrero or South Beach) here are your current ten day forecasts:
And yes, I'm doing this to try to convince some friends of ours to move up here -- you know who you are. :)
One last thing to mention before I go lie down -- no, I'm not going to talk about Pence, Rodgers-Cromartie, or Asomugha -- you can read all about that on philly.com. Instead, I want to share a quick story about a pretty inspirational man we met while dropping off the dry cleaning earlier this week. We had a ton of stuff to drop off, and while Heather was talking to the woman at the store, this older gentleman who was waiting saw my cap and commented on the upcoming Phils/Giants series -- Giants fans who want to gloat about the series win in Philly would do well to wait a week (if not a couple months) til we at least see what happens in SF.
Long story short, the guy mentioned that he grew up in Cleveland (and was a Tribe/Browns fan) but had lived in Bay Area (and now Marin) for 60 years. I said something like, "you must have moved when you were little, how are you still a fan of those teams?"  He said, that he moved when he was in his 20s.  I was floored. He said, "I'm in my 80s, young man," or some such. Now this guy looked like he was in his 60s -- and he was in great shape. Turns out he plays tennis, bikes, the whole nine.
Given the state of health of some folks I know in their 80s, it was really cool to talk to a sharp, friendly, guy in his 80s who seemed to have 20 or 30 years in the tank. His secret "exercise and moderation." Doesn't seem all that hard. Really encouraging story.
OK, I lied -- that wasn't the last thing. This series of Orion pics is: