A Little Better All The Time

"I've got to admit it's getting better."  In a nutshell, that's what my team's been telling me over the last couple months, and today was no exception.  Yes, today was the big BMB (bone marrow biopsy) which is usually scheduled for Day +100.  For me it was Day +94 -- or about 3 months since my transplant date (which was March 30th).

I will spare you the details on the actual procedure.  If you really want to know, there are plenty of videos on youtube.  It is not pleasant, and it was prob more intense because other than the local anesthetic, one Ativan and one oral Dilaudid, I refused to take any IV drugs for pain.  I've done this before -- and it really sucks -- but it's reletively quick, and I'd rather not be a zombie for the rest of the day (which I would have been on the Morphine.)

The results go like this:
1) After one hour, they tell you how your blood/marrow looks (via microscope observation.) The most important data point.is what percentage of "blasts" I have. Anything under 5% is good. Ass-kicking jg only had 1%. Cha-ching!
2) Next week they find out all kinds of additional details which I don't even really understand Flow Cytometry and some other stuff.
3) The following week they get a deeper molecular analysis of something -- this is way over my head.

My doc said that those additional tests are likely a formality at this point -- meaning, they don't expect to find anything bad there based on what they saw under the microscope. 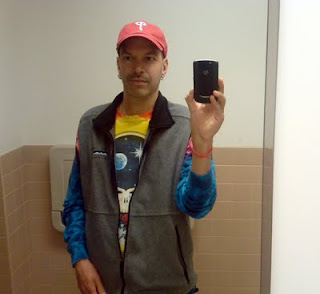 (jg after the biopsy)
Put this altogether, and it means that starting today, I will be doing IV magnesium every other day (down from every day) and starting next week, they are going to start tapering my Tacrolimus. The IV Mag makes me soooo tired, so the hope is, on days when I don't have to do it, I could start conditioning more: longer walks; bike rides; restorative yoga, maybe? As the "Tac" decreases, my new immune system will start to get more aggressive, so we'll need to keep an eye on how well it behaves. If it behaves nicely, we continue to reduce the Tac, and slowly reduce the anti-biotics as well.  Once I'm done with the IV Tac altogether, they can take out my Hickman Line. That's big.

In terms of what it all means for me... I could be looking at 75-80% energy by September. 80% ain't 100%, and many parts of my body have atrophied but it's probably gonna be enough for me to resume my normal life (I think). I'll just need a lot more sleep.

So that's the health update. Really, the news couldn't be much better! I'm going back to UCSF a week from tomorrow, and then the following Thursday for my next two appointments.

So what else happened in the last two weeks?  Well, after Heather's mom left, we still had one full week between when Floyd's day care ended and his new (big boy) pre-school began. Talk about an exhausting week!  But last week he started at the new school. He's going there 3 days a week and so far it looks like it's going to be perfect for him. I even got a gig playing an hour of piano once a week during the "pickup hour" (4p - 5p) and they are actually knocking off some tuition for it. Fun stuff.

Here are a few other highlights.

Yesterday, Mae came up to visit and brought us some Taskykakes along with some homemade sausages from Boca's killer restaurant.  If you haven't been to Deli Board in SOMA, get your ass down there for a real (read: not typical, crappy, small California) sandwich.  I mean just look at this:

(Need a platter?)
There were two birthday parties over the past two weekends as well. First, Ruby turned 3! Valon and Gina had a very nice, very small party with a few families and relatives. Valon cooked awesome food, the kids played in the little pool, and everyone had a great time.

This past Saturday, Maisy turned 1. It was my first trip to San Francisco (other than to go to UCSF) in months. Maisy is adorable and mellow -- great combination -- don't have a clue what that's like. :)  As usual, Dave and Laura hosted a great party. Here's Maisy wearing the hat we got her: 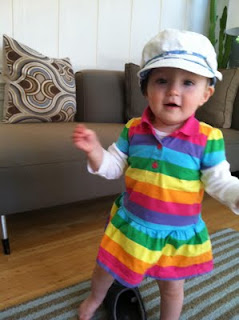 (How is it that I can look like my dad *and* be cute at the same time?)
Last week it was way hot up here -- like in the 90s -- so the kids got to have some fun in the sprinkler: 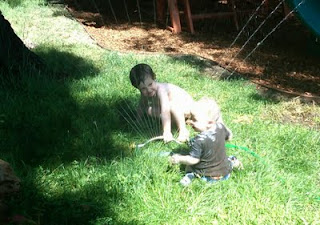 Of course, I've been watching a lot of baseball. Who lets an image like this get on the air? Way to go Fox Sports Cardinals: 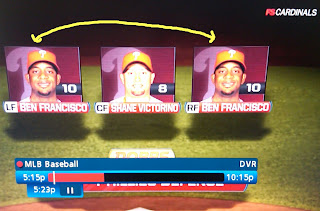 (left field: bugs bunny; right field: bugs bunny)
Don't ask me why, but I love when all the numbers in the score box are the same.  Best is when it's 3-3 with 3:33 left in the 3rd period (or 3OT) in hockey, but this one isn't bad. I guess it's not really perfect since there should be a guy on first, not second.  Alas... 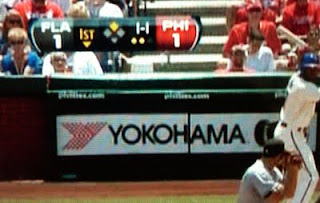 Onto books.  Heather got me this awesome book called "Sh*t my Dad Says

" for Father's Day. I'm sure many of you have heard of it; I hadn't. Honestly, one of the funniest books I've ever read.  It's a real quick read -- probably 3 hours (if you read slow like me). Check it out.
I've also been trudging through David Byrne's Bicycle Diaries

.  I say trudging because it's not really light reading -- I hoped it would be, but it's not. It's not that I dislike it, I just wish it were a bit simpler and more focused on actual cycling. He would probably think I'm a buffoon for saying such a thing, but IMO, he goes way off on tangents that seem more self-serving than designed to entice the reader.  But who am I to talk?
Floyd got some new books too. We really like this Leo Lionni author. Among others, two of Floyd's new favorites are Alexander and the Wind-Up Mouse

and An Extraordinary Egg

.We also got Little Blue and Little Yellow

, but haven't read it yet.
Oh, and Heather found this great book about ghosts called: Ghosts in the House

. Why are we buying our 3 year-old a book about ghosts? Well, it's my fault. Something weird was going on with his iPod.  In the middle of the night, some song would just start playing. Well, joking around with him, I told him maybe the ghost did it. Problem was, whatever song happened to come on was a scary song. So now he thinks there's some ghost that's gonna change his iPod music in the middle of the night. Oy. Turned out, he had set an iPod alarm and told it to play a certain playlist when the alarm went off. And, because the iPod was on Shuffle, any song in the entire playlist could have come on. So I have no idea which song it even was. He's convinced it was "Blues For Allah," which is, admittedly, a pretty scary song. Thing is, when I put Blues for Allah and One From the Vault on his iPod, I specifically did not include the Blues for Allah track for that exact reason. 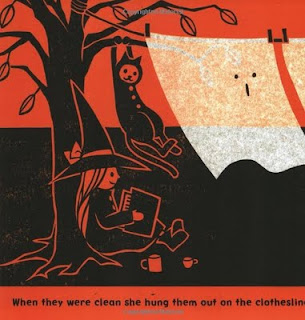 (After a trip through the washing machine, the ghosts had to dry)
Even though I explained to him, umpteen times, that there's no ghost in his room and that the music changed because of an iPod alarm, he still says to me, every night, kind-of timidly, "Daddy, is the ghost going to change my iPod tonight?"  "No, Floyd. There's no ghost."  I feel like Howard: "There's no smoke up here, Ma."
Moving on... Not gonna say too much about the Flyers trades. The short of it is, upon a few days of reflection, I like it.  Carter and Richards are great, but, in addition to the obvious Salary Cap issues related to signing Bryzgalov, I think those guys got a little too comfortable and it affected not only their play, but the play of the team.  If we kept them another year, they'd be locked into 9, 10 more years with no-trade clauses.  We got some amazing young talent, and we were already deep at center.  Something that will never be known publicly must have happened with Richards. No other way to explain the nosedive this team took starting in Feb.
I'll still wear my Carter jersey with pride, but let's put the C on Pronger's sweater and see what we got.  For now, it's baseball season -- and while the Phils have plenty of problems to work out, they are still playing good ball and three of their four aces have lived up to the billing. Halladay, Hamels, and Lee, are pitching their balls off right now. Also, Floyd loves his new "Phillie Kamatick" (well, that's what he calls it) hat:

The big news around the house is that we are converting about 1/3 of our garage into an office/studio.  It was tough to make the decision, but overall it's going to be the best thing for everyone.  Heather and I will have our own dedicated workspace for the first time since late 2007: me for work and music, her for computer use and art projects; and at the same time we'll be morphing the guest room/office into Orion's room.  The futon will still remain in his room -- so you'll feel right at home when you come to visit, Gramma, but Floyd will get his own room.  We think that'll be better for everyone all around.
As I type this, Alex, our contractor is cutting and building our custom desks and shelves. On Friday, Comcast is going to come and run a line to the garage and we're gonna move the cable modem; router, second (headless) cable-box, and slingbox all downstairs.  My computer and the NAS will shortly follow. 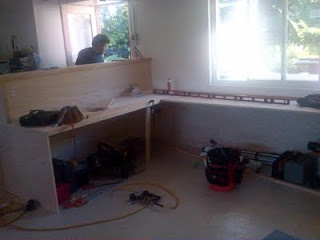 OK, I'm exhausted, and my back is starting to hurt from the BMB. We're gettin' there everyone.
I am kicking its ass. Thanks for all the love and support. Please come visit us in San Rafael.
-jg
Email Post