So Much to do, So Why Why Weigh?

Today is day +12 and we are in full recovery mode.  My WBC counts have skyrocketed from < 1.0 to almost 9 in the last two days. ANCs (neutrophils) aren't back yet, but they are probably in the 4 range.  This means that the new stem cells have engrafted and have begun producing white cells.  This is a major milestone, I'm "ahead of the norm" according to my Nurse Practitioner, and if all goes well, I should get to go home by the end of the week.  Of course this "go home" won't be like last time where I was biking within a week.  I'm going to be tired and on major meds, potentially even IV, for quite some time.  I'll also need to go UCSF twice a week (Mondays and Thursdays) until around day +100 -- the big milestone: when they do a  bone marrow biopsy to see what's there. 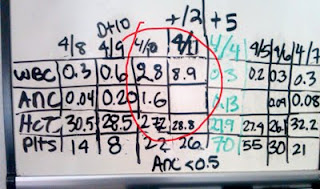 (White Blood Cell count went from 0.3 to 0.6 to 2.8 to 8.9 in the last few days)
So the news is good, but it hasn't been all fun and games.  The initial chemo took all of my energy (and my hair) and they've been giving me this other chemo through out the recovery -- methotrexate -- which makes you feel like ass.  In fact, this weekend was extremely rough: major mouth and throat pain; bone pain, low appetite, weight loss, extreme fatigue, congestion, and then some.  If it weren't for the morphine and the oxycodone (which isn't quite the same as oxycontin) I don't know how I would have gotten through it.

The plethora of sports on TV and the internet were extremely therapeutic as well.  I watched just about all of The Masters and every Phils game (other than the Saturday Fox blacked out one -- listened to that).  Even watched some NYY/BOS and some Giants with Brown.

Speaking of Giants, can I just point out the difference between Bay Area sports writers and Philly sports writers?  Look closely at this picture (click it to enlarge.) 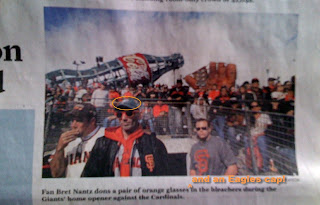 The fan the caption mentions is wearing an EAGLES cap, for God's sake.  Now I can't imagine a Phillies fan wearing a ton of Phillies gear with a Niners cap, but if there was some such fool, I can guarantee you the Philly paper would not feature him.  Ah, Bay Area sports - enjoy your one championship.  That's all you're getting for at least 10 years.

What else?  Oh, I said the chemo took my hair.  Here's a photo from yesterday: 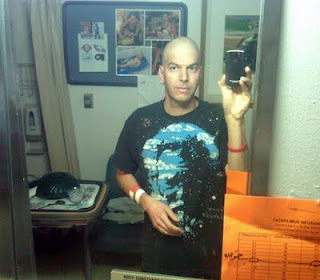 (I'm starting with the Man in the Mirror)
OK, incredibly tired.  Gotta nap.