Today was day 4 of 5 of a mini-consolidation round of chemo.  Considering how easy my last consolidation round was, I figured this was was going to be a piece of cake -- as in, I didn't think I would even feel it or notice it.  Well, despite the T-shirt I'm wearing today, Superman I'm not.  The chemo is definitely affecting me, and since I refused the Dexametasone starting Tuesday, I've been feeling pretty fatigued the past few days.


The reality is, there's a huge different between inpatient and outpatient chemo.  During my last consolidation round, the most exercise I got was walking a couple miles on the hospital floor or riding the stationary bike for 20 minutes.  And if I feel like lying down, I lie down.  But when I'm home with the family and kids, it's a whole different story.  Running after Floyd is exercise enough.  Plus, for better or worse, I'm forcing myself to bike to the appointments as much as I can.  Weather got in the way yesterday, but I rode again today -- the mostly-flat 5-mile route both ways.  So that's Mon, Tue, and Thu that I've ridden.  Should be nice again tomorrow, so hopefully I'll get to ride 4 of the 5 days.


It's not that the riding kills me... my legs and cardio remember what it's like just fine and are welcoming the intensity, it's just that my body as a whole is drained.  So instead of getting up at 5:45a like I usually do, I had to sleep/rest until 8am today, and I actually took a nap during the chemo treatment.


Anyway, one more day of this, and then I get another 2-3 week reprieve until the real fight begins.  Apparently, the chemo they are going to give me at the beginning of the bone marrow transplant (BMT) is going to make all the previous chemos (including the induction) look like child's play.  That's scheduled to start on or around March 23, 2011. Oy. 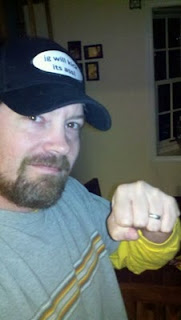 Yeah!  He's sporting the jg will kick its ass cap.  Have you gotten yours?  Email a pic, and I'll post it here on the blog!


Also, former and current co-worker, Kellie got me a sweet, old-school, power blue, custom Phillies shirt with "JG WKIA" (and Cliff Lee's number) on the back.  How cool is that? 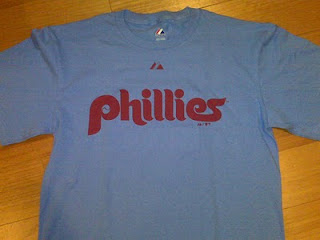 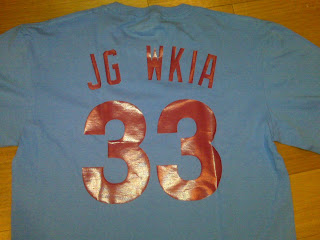 (back)
Thanks, Kel.  Absolutely awesome shirt.  OK, time to relax.
I will kick its ass,
-jg
Email Post