Do Do atama ga shock

An old friend dropped me an email this morning (yo yo, Adam!)  He shared with me a Japanese word which rivals omekase in terms of coolness, and obliterates it in terms of relevance to this blog.  The word is:

According to Adam: In Japan, they have an expression: Gambarimasu which is a combination of "I will do it." and "I will try my best!"  Even when shown extreme hardship - such as now - Japanese still have the spirit to survive, achieve and do their best.

Today is Day "Minus 2" -- i.e. my stem cell transplant is in two days on 3/30/2011 -- and it finally feels like it.  Meaning, I feel like crap.  This is expected, of course, so it's all good and I can still proudly say, "Gambarimasu!  Hai!"  But it's still uncomfortable and annoying.  The chemo is done, and the immuno-supressives (sp?) have started.  Here are my White Blood counts:


With WBC under 1.0, that's the end of the outside food.  Not coincidentally, my appetite has pretty much vanished.  Yesterday, I ate equivalent of a medium-sized breakfast -- a #5 bagel from Crepes on Cole -- and that was it for the whole day.  Thanks to Raffi for bringin' it over. Funny, Dave came over too and was hungry, so he ate the hospital food.  Better him than me.  Actually, yesterday was a red-letter date in the history of Dave Brown.  Not only was he sporting a new jgwkia hat, but for the first time since the blippin Giants won the World Series, he wasn't wearing that dorky Torture shirt. ;) 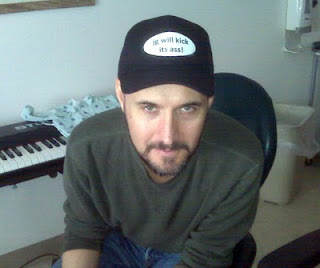 (The Reverend, David A. Brown -- my bestest buddy)
So the three of us watched the first basketball game of theday (wooo, VCU!), then they left, and I rested.  Only did one set of laps yesterday, so I gotta muster up the energy to get some more exercise.

Lunch just arrived.  OK, I guess I'll eat this hot dog.  It's "all-beef," ya know.  If I can eat a little bit here and there it'll go a long way in keeping my weight up.  The "kids menu" is my savior, once again.

Seriously though, my energy level is really low.  All I want to do is lie in bed.  Having the keyboard is big (yes, Rob M. brought it back - and yes, middle C still doesn't work) -- if I don't feel like motivating to do laps, I can at least sit down and play a few times a day.  Inevitably, I'll get into it and start jammin' out, which is arguably just as good (if not better) for me than doin an extra set of laps.

Speaking of laps, here's a (blurry) pic of me doin' laps a few days ago.  One other advantage of the Hickman line (over the PICC) is that, since the port is on my chest (not my neck), I can wear normal shirts. 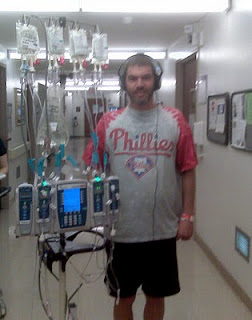 (Look at all that chemo!)
The big difference this time around, in terms of amenities, is the 4G network hotspot Benji brought me.  Thanks, Benji/Steve.  Now I finally have the bandwidth to stream shows from my Slingbox!  It's pretty lo-res -- especially for hockey, since the camera is always moving -- but it's much better than nothing.  It's nice to know I won't miss any of the playoffs.  Go Flyers! 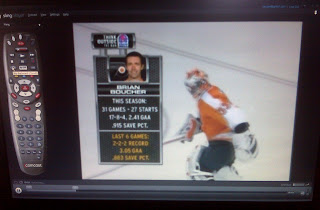 (PC Slingbox app streaming from my Comcast DVR)
I also got the MLB At Bat 11 app for the iPad.  The store credit is still going strong; Thanks, Loftie!  About half of the Phillies pre-season games are televised through this app, and the resolution over 4G is fantastic  With the Final Four, The Masters, MLB season starting, and hockey playoffs, hopefully these next few weeks are going to fly by. 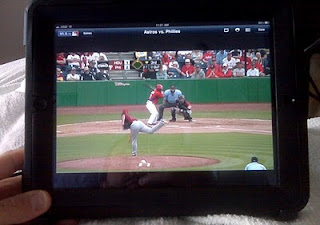 (Phils/Atros pre-season game on my iPad) 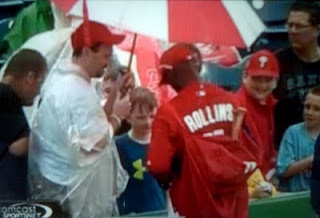 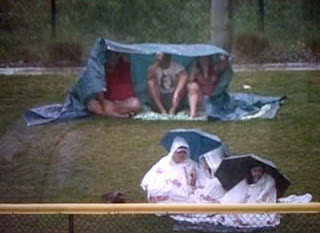 (dedicated phans in the warm rain -- looks like fun)
Lastly, on the entertainment front, I downloaded Cribbage HD for iPad so I can kill Matty's place.  Text me when you're ready for a game, chachi.  I'm gonna bust out the Dorcas on you!  If anyone else wants to play, grab the app for iPhone or iPad, and add me on Game Center.  Use my johngreene.org addy, not my gmail addy for my Game Center username.  I kill all of your places!!!  :)
OK, time for laps.  Sounds like Laura Brown is gonna join me.  Hooray!
I will kick its ass,
-jg
Email Post
Labels: aml cancer leukemia