No news is good news?  Second Hand News?  Huey Lewis and the News?  Typically, when I don't post, it means things are going well.  So yeah, "no news is good news" :)  I've just been busy.  I got over my sore throat without incident though both kids now have ear infections -- business as usual in the winter with two little ones.

So yeah, life has been incredibly busy since my last post... I guess that means things are returning to normal... somewhat, at least for now.  Call it the calm before the storm -- a month from now, they are going to destroy my immune system and give me a new one.  Oy.

Going chronologically, the big event last weekend was that Floyd "Watermelon Truck" Greene turned 3 on Saturday. It's know it sounds cliche, but they really do grow fast.  We didn't plan any kind of big birthday party -- as much as Heather loves that kind of thing -- because we didn't know if I'd be home from the hospital, or how I'd be feeling.  In the 11th hour we decided to invite some local San Rafael folks and a couple others over for a brunchie-birthday-party on Sunday (Saturday was booked with swimming and another birthday party -- Happy Birthday, Jack!)

At around 7:30a Sunday morning, Floyd and I went out to pick up scones at Arizmendi and grab some balloons and other last minute items at Safeway.  It was so nice to go out that early... only the earliest of risers were out and about, and the sky was clear blue -- first sunshine in days.  Everyone we saw was smilie and friendly.  When we got back, one of the cheaper, single-color balloons popped just as we got inside the house.  Why do they always over-inflate them?  It scared the crap out of me, so I kinda yelled, and then of course Floyd cried... and cried and cried -- it was actually kinda funny.

Side note: as I type this, four full days after the party, the more expensive balloons are still floating on the ceiling: 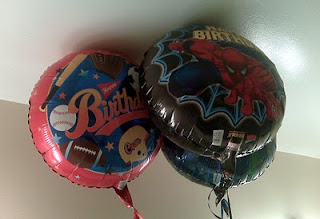 I've never seen balloons last that long.  I guess you get what you pay for.  And from what I hear, we might be paying quite a bit more for helium balloons in the future.

Anyway, the party was a great success.  Here's a pic of some of the kiddos with their cupcakes (pictured left to right: Ruby, Jaedon, Floyd) 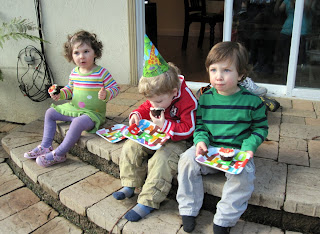 And Floyd got the best present ever... a stomp rocket set!  Sometimes inventions don't have to be complex to be cool.  Stomp on the air-compartment-thingie and the foam rocket shoots 30 feet in the air.  Nice.  The inventor is probably basking on the beach somewhere.  Lucky!!  Floyd is having a blast with this one: 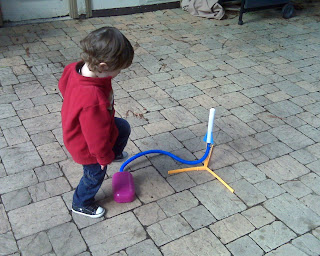 One of the rockets already got stuck way up in one of our redwood trees though.  Maybe tonight's rain will bring it down.

Speaking of which... man, it is really coming down outside!  We have another Severe Weather Alert for tonight -- no, that doesn't mean a foot of snow like it does out east, but it does mean lots of rain and freezing temps at low altitudes.  Ever been to San Francisco?  Seen the hills?  Imagine if it actually froze over. No worries this time around.  I think the freezing level is predicted to be at around 1000 feet.

Another present Floyd got, courtesy of mom and dad, is this cool Yamaha drum pad.  For the music-related stuff, I feel like "toys" are pretty useless.  You want real "grown-up" products with stellar sound that kids can use. I think he's going to get a lot of mileage out of this one.  It's hard to see, but he's got a blue drumstick in his right hand and he's hitting the top-center pad: 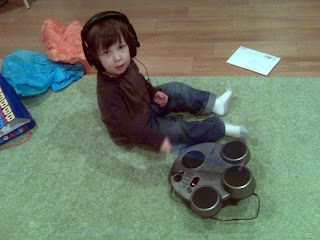 On Monday evening (well, late afternoon), to keep the celebratory vibe going -- it was a holiday after all -- and on a friend's recommendation, we went to Bubba's Fine Dinner in San Anselmo.  Heather's Shrimp Po' Boy sandwich was incredible -- I might have to get it next time.  I got the spaghetti and meatballs, and Floyd got Mac 'n' Cheese.  It's an honest-to-goodness diner, so there's breakfast all day.  The yeP! guys will get a kick out of this one: 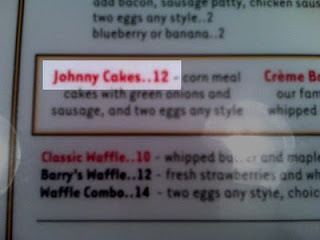 The place was great -- we'll definitely go back.

As we settled into the week, I was eager to get back to work -- working from home, that is -- but there were things to do and people to see.  I had to pick up my new (used) car -- yep, as much as I didn't think it would ever happen, we decided to get a second car: just something to get me from point a to point b.  Point a being our house, and point b being doctors offices and hospitals in the short term, and the ferry terminal in medium term.  The reality is, it's going to be awhile before I'm in shape to bike to and from the ferry every day, so I need a backup plan.  That backup plan is this certified pre-owner 2005 Camry 5-speed.  No one wants a Sedan in a stick these days -- no one, except me.  So I got a great deal on this puppy.  All it needed was an after-market stereo with a USB/iPod in.  Dealer took care of it.  :) 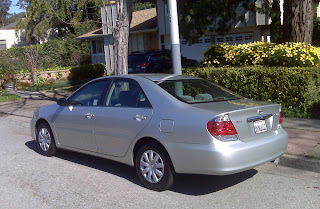 Heather named 'er "Yota."  That picture was taken in the front of our place.  You can see our other car (the Outback - "Ruby 2") in the driveway.  Long before we had two friends who named their babies "Ruby," we had a 2000 Subaru Forrester who shared the same name -- hence "Ruby 2 for the new Outback"  You guys name your cars, don't you?  Did I mention that Yota's a 5-speed?  :)  That's the iPod's USB cable behind the shifter 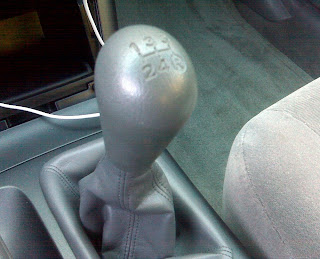 On Tuesday afternoon, I had an appointment at the California Cancer Center in Greenbrae. This place, which is adjacent to Marin General Hospital is going to help manage some of my care.  Basically the CCC and Marin General will take care of anything I need where my team doesn't think it's absolutely necessary for me to come to UCSF (e.g. blood draws, transfusions, certain tests, etc.)
This is huuuge since CCC and MG are 5 mins away (ok, maybe 8) by car whereas UCSF door-to-door is closer to 35-40.  Yota did the job -- got me there and back.  All she needs now is some kind of license plate frame and a tiny stealie.

Wednesday was a fun one.  With Floyd in day care, and our neighbor watching O, Heather thought we were going to spend the day together for a belated anniversary get-away. Instead I surprised her with a spa day (which she loved) but instead of going with her, I drove to UCSF to get blood drawn and undergo 4 different pre-BMT tests.  Why do I think I got the short end of the stick on this one.

Today, Thursday was a work catchup day.  Tomorrow will be more of the same (minus a 9:30a appointment).  OK, I'm exhausted.  Night night.