Quick Donor update since Benji asked... as far as I know we are on track to start the BMT during the week of March 21st.  My understanding is that we have identified two donors (there are more if things go sideways) and are pursuing in parallel.  In addition to checking in on the donors' health, UCSF is pioneering a new typing technique to take the 10-out-of-10 to 11.  This one goes to eleven!

Also, for those that don't know, I will have no idea who/where the donor is until well after the BMT, if at all.  The marrow.org folks act as the "middle man" and the way it works is, when I'm cancer free for a year, I can request donor contact.  If s/he agrees, then we can connect.  Until then, or even after the 1 year period, if the donor doesn't want contact, I may never know who helped me.  Nutty, huh?

On an unrelated, and very sad note, a long time acquaintance and feisty bartender at the Kezar Pub passed away this week.  Bridget, we've had some interesting times to say the least, and your presence will be sorely missed at the Pub.  Hopefully you're hangin' out with Jer-bear right about now.  Bridget became pretty fond of Floyd over the last couple years. Apparently, she had a big hand in the creation of this banner: 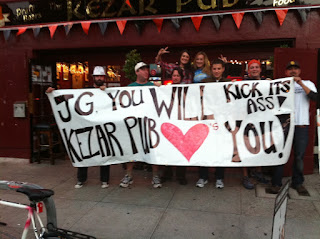