Well, here we are on day 8 of this consolidation chemo and things are moving along accordingly to plan. It basically goes like this: 1 week of chemo and steroids with few side effects; 1 week of low counts where you can feel like ass; 1 week of counts coming back; then go home and be with family.  That's the plan anyway.  YMMV.

The chemo part was actually finished Sunday morning, so now we're in the second week and my counts are finally starting to drop.  That means my energy and appetite are starting to fade a little.  For you oncology buffs, here are my counts for the last 4 days:


The biggie is really the White Blood Count.  Once that goes under 1.0 (tomorrow?) I'll be neutropenic which means I'll have to stop eating at all the yummy outside food people have been bringing me.

What else on the health front?  Oh, yeah hey got the biopsy back from that eye thing.  They don't really know what it is, but they do know that it is not directly related to the fungus infection nor the leukemia, so that's great news.  The hope is that it'll just go away on its own based on the chemo/steriods.

Back to the food thing, I gotta give a shout-out to Sinead (of the Kezar Pub), Gaurav, cj, and Heather for bringing great food over the last few days.  On Saturday Sinead brought more wings than I've ever seen in a single order along with a boatload of carrots and celery.  It had to be a large plus a small. 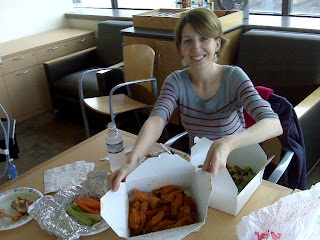 I stuffed myself for lunch and still had 9 wings left over for lunch the next day.  Good thing she brought a vat of bleu cheese too.  Thanks, Sinead! 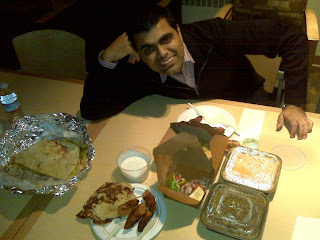 I'd never had their food -- Heather and I always ordered from Bombay when we lived the city since they were so close.  The Seekh Kabob and Lamb Saag were awesome as was the Chicken Makhani and Biryani Rice.  Thanks, homie, it was great to see you. 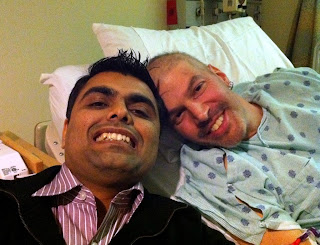 On Sunday night, Heather brought some yummy matzoh-ball soup for dinner (courtesy of Gramma), and we had a little "date night".  What's a date-night in the hospital?  Simple: movie + laptop + headphone splitter.  We wanted something fun so we watched "It's Complicated," which was surprisingly funny.  If you haven't seen it, it's worth it.  Thanks for the recommendation, Mickey.

And finally, last night, one of my co-workers came by with some burritos.  Sometimes it doesn't have to be fancy to be good.  Have a great trip back to Wales, cj, and thanks for a rockin' year at Salesforce.com.

For lunch today, Heather's going to bring a yummy hoagie (as if you can get a real hoagie in SF) and for dinner Brown is gonna bring some Chinese.  I'll take pics.  After that... it's gonna hospital food for the duration.  Ugh.

Of course, when you think of Chinese food, you think of Howard -- well I do.  Don ton doup, anyone?  Anyway, the weirdest Howard-esque thing happened the other day.  My hospital land-line phone rings, which is a little odd, since most people don't call me unannounced.  So I answer the phone and it goes something like this:

Now at this point, part of me is thinking that Brown or Tripp somehow got in touch with Howard and this was some Richard and Sal thing, so I just play along a bit.

jg: Can I talk to Howard?
caller: Come on son, tell me how you're doing
jg: Who are you trying to reach?
caller: Well, who is this?
jg: You called me, man -- this is my room

It went on for a bit, and I (sadly) realize that it's just some guy who's kid probably had this room before me.  So I stopped being a clown and told him that I've been in this room for about 5 days and I have no clue who was here before me.  Wish I had been able to tape it.

Switching gears a bit, I've been trying to exercise as much as I can while my counts are still up.  On Saturday, I did around 35 laps around 14 Long which is about 3 miles, and yesterday, I rode the spinning bike for 45 minutes or so.  I'm guessing it was the equivalent of about 8 miles of flat riding.  That's not going to happen today, that's for sure -- I just don't have the juice.

OK, more randomness.  Last week I mentioned to my concierge contact that some of the TV channels were fuzzy -- not just on my TV, but in the whole building.  FOX was the worst.  It's just a crappy analog signal so these things can happen, but I was surprised that no one had checked it out.  It was just as bad during my last stay.  So he called maintenance; an engineer came by my room; I told him the deal and showed him some channels; and he said he'd look into it.  This morning, he pops in and tells me to check out FOX, and it's perfect (well, as perfect as a low-def analog signal can be on a big HD flatscreen).  So now, I (and everyone else stuck here this weekend) will be able to watch the Super Bowl in reasonable clarity.  Hooray!

This also means The Feud comes in clearer, and there couldn't be a better week for it since they are doing the Wrastlin edition.  HD would sure be nice :) And while we're on the Feud, this second guy in the "fast money" duo below got last week's dooshie of the week award.  His partner got 161 points in the first half.  All he needed was 39 points to win $20k... And he only got 27.  His last two answers were the worst in history.  Da da dummy. 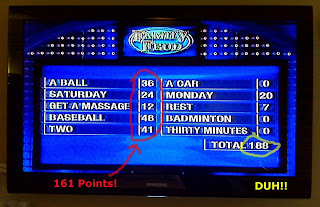 Here were the questions:

1. When walking in park, name something you are you likely to get hit with?
2. What night do you get the most sleep?
3. What do you do for back pain?
4. Name a sport where you wear gloves.
5. How many hours a week do you spend cleaning the house?

Note: the "fast money" Feud screenshot was before the jg-induced FOX cable fix.  It's much better now.

Heather just showed up for lunch, so we're going to eat, and then I'll post this. 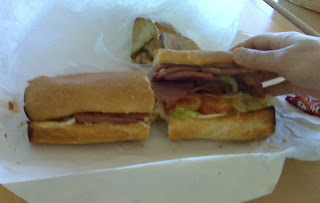 My taste buds really deteriorated in the last 24 hours though.  I had to put a whole packet of salt on each half, just to taste it, and my Peach Snapple didn't taste right.  The taste buds going south is probably one of the worst parts of this.  Ah well, small potatoes in the vast scheme of things.

And finally, remember that special project I mentioned for a blog reader?  I've probably spent 15 hours on it and it's really coming together.  Psyched to finish.  I had some laptop issues that were slowing me down, but things seem to have settled down (touch wood.)

Oh yeah, somehow, someway, I've been working about 4 hours a day from here, even with this crappy wireless connection.  Go Salesforce!

Before I sign off, here's a shameless plug.  Get yourself one of these awesome caps from cafepress and walk around supporting jg!  The cap is nice quality, and the patch on the black one is totally old-school gas-station style.  Thanks again to Benji and Carolyn for setting this up.  Here's a close-up of the cap: 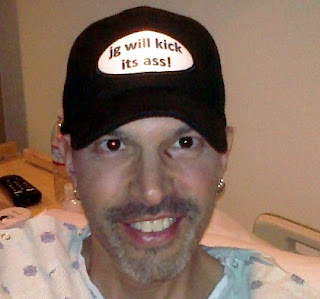 I will kick the living sh*t out of this thing.