Yesterday was the best day I've had in weeks, and today is even better.  I didn't sleep well last night -- I think I gotta lay off the Norco -- but I still have more energy than I've had since the chemo started.  I'm finally past the nadir.  Counts continue to rise.  This is a good time.  I did 4 laps around the 8th floor (1/2 mile) and probably should have done another 4 later in the day.

Last night, Raffi came by and brought the best dinner I've had since I've been here (sorry, Loftie, that cheesesteak was a little dry).  Sometimes it's the simple things... a huge tub of miso soup from (Grandeho's) Kamekyo.  shown for size comparison. 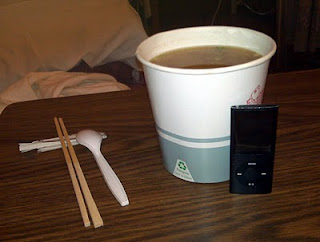 I think I took this pic just after I told Raff that his mask was not only upside-down, but inside-out :) 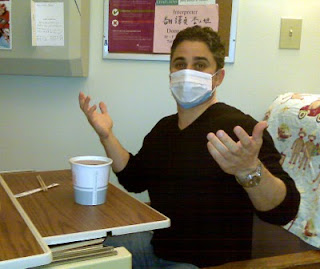 About an hour after Raffi left, Heather (the best monkey) came to visit.  Hooray!  I was dozing off at the time, but got quickly got a second wind. Of course, she visits me just about every day, but it just felt like there was so much to catch up on -- maybe because my energy was up.  She and the kids have been in the new house for a week and I haven't even up there!  It's gonna be so weird to go "home" to a more-than-half moved in house.  I really can't wait.  Also, her mom arrived yesterday -- she's staying with us for 9 days which is going to be awesome.

Oh man, I wanted to post this before the surgery, but the men in the white coats are coming to take me away (ha ha, hee hee) right now.  They are going to check out (and drain) my left sinus.  Back soon.

As Heather and I were chatting around 9:45p, Dr.Weber came in!  Talk about burnin' the midnight oil.  He gave Heather and me the complete run-down of where we are and where we're headed.  I was so glad she was here for this explanation


Short version: I could be out of here as early as tomorrow (Friday) if all goes well.  Next step: UCSF appointment on 12/9 to figure out Part B of treatment.

Gotta deal with some post surgery nurse stuff, then need to test some wireless stuff for the Eagles game.  I'm sure this post is littered with typos and continuity problems, but I gotta go.