Next up is the San Francisco Big Climb which takes place on April 29, 2023 at Oracle Park. More details on how to climb with us soon. Need a few more 2022 donations for tax purposes? No time like the present. :) My (still to be customized) fundraising page for the 2023 Big Climb is here.

A little update and some annoyances


As promised in my last (meaningful) entry, I'm going to share with you some of things that drive me batty, not only regarding my health and this treatment, but regarding the hospital care here at St. Mary's.

Before I get started with that, let me just say, that as we come off a wild-and-wacky Eagles win and enter Thanksgiving week, this is a time to really reflect on all the positives, so let me take a moment to do that before I get to the more cynical (and less serious) portion of this post.

I consider myself extremely lucky right now.  Yes, the cancer patient feels lucky.  Why?  The amount of love and support that is flowing my and Heather's way right now is truly remarkable.  Tough times bring out the best in people, and we got some pretty darned best people in our lives.  I'm not going to individually thank everyone here, but if you have, even once, helped Heather with the kids, or helped with the move, or sent a card, or sent a gift, or even just sent an email or text with your thoughts.... THANK YOU for being part of this.  I know it sounds cliche, but it's true: we could not be doing this without you! 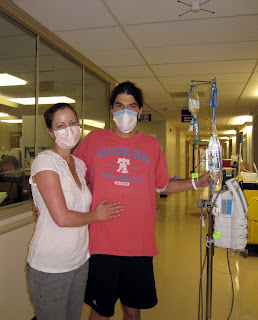 OK, now for the annoyances.

Mouth
One problem with chemo is that really goes after rapidly dividing cells.  So not only does it hit the cancer cells, it destroys your GI tract and it tends to affect your gums, mouth, tongue, etc.  Now I generally take really good care of my teeth, so it's a little frustrating that my gums are so sore and tender.  The tenderness makes it hard to floss, not flossing make it worse, and the cycle repeats.  I flossed the morning and actually cried out in pain on a few of the teeth.  Ugh.

You may have read that mouth sores are part of this as well.  Total friggin nightmare.  Thank God for the "magic mouthwash" they give me.  Not only does it have a healing agent, but it's got something that numbs as well.  It's hard enough to eat as it is, navigating around landmines in your mouth is just too much.

Fevers
Fevers were a pretty big problem last week, but (touch wood) I haven't had any in the last three days and they've removed one of my antibiotics.  Last week, though, it was bad.  My temp would spike up, I'd get chills, and have to take Tylenol.  Then I'd get sweats, have to change clothes, my fever would break, and the cycle would repeat.  Sometimes multiple times a day.  Fevers are bad because I'm extremely susceptible to infection right now, and it's imperative that I don't catch anything.

Night Sweats
This actually started happening before I was admitted to the hospital and has continued on and off for the past two weeks.  I assume it's just my body's way of getting rid of toxins, etc., but it can be pretty jarring (not to mention uncomfortable) to wake up at 3am completely drenched.  Not talking damp, talking soaking wet shirt and often bed sheets too wet to sleep on, so I gotta call the nurse, get up, get my shirt off (PICC line disconnect required), towel off, get another shirt, and sit with a blanket while the nurse changes my sheets.  This whole ordeal actually happened twice a few nights ago.  The second time was around 6am, so I just took a shower.  I don't shower much.

There's a red call button on the TV Remote... 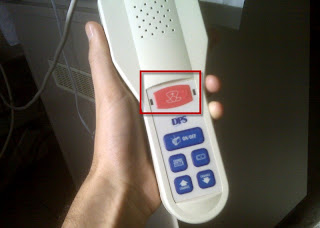 you're supposed to press it day or night for assistance.  The problem is the response times are wildly inconsistent.  Sometimes, someone answers right away (via intercom) or my nurse comes in reasonably quickly (within a minute), but sometimes, nothing happens for literally 10 or 15 minutes.  Now for me, this isn't that big of a deal.  I can either wait, or if something really serious, I can get up, go to the door and make eye contact with the nurses station.

But what about the other patients?  There's this old guy in the next room... I happened to see him standing at his door the other day when I was doing laps.  He was telling a nurse that he had been in the bathroom and pulled one the bathroom "help" strings, but nobody came.  Sorry, that's not acceptable.

Here's the schedule.  I usually to go bed between 9 and 10.  Someone comes in to check vitals and drips at 11:30p and then again 3:30a.  Then at 5:30a I get my blood drawn.  It's a little much, but I'm used to it by now.  It's not all that different than life with two little kids.  Here's the problem: sometimes, whoever writes the order for my blood draw fails to indicate that I have a PICC line.  Why does that matter?  Well, drawing blood from the PICC is something my night nurse can do.  Drawing blood from my vein requires a different person (on a different schedule) to do the work.  Now sometimes this is necessary.... sometimes they have to take a "blood culture," and for that, they can't use the PICC line, so I've had a couple of those at 4:30a.  Fun.

But last week, not once, but twice someone came in at 4:30a for a regular blood draw.  "Misser Gleen, I here to draw some brudd."  The first time it happened, I'd had some night sweats and was getting back into bed at 4a.  I think I got to sleep around 4:20a, when 10 minutes later...

So I woke myself up, raised the head of the bed, and got ready for the inevitable.  That's when I realized that I'd had a blood culture taken the a day or two before.  I said, "Do I really need another culture?  I just had one."  She said, "oh no, diss not kulture, diss just regular brudd draw," at which point, I held up my left arm so see should see my PICC, looked over at her, and just kinda shook my head.  She said, "ohhh, you have PICC, oh I'm sahlee, I have your nurse do it rater.  Go back to sleep."

OK, honest mistake, it happens.  No big deal, right?  Well, the same exact thing happened two mornings later, and let me tell you, I wasn't as nice about it.  I know I don't have room for any negativity right now, but I'm sorry, I need my sleep, and this is reeeallly easy to avoid.  This time, when she came in, and I saw the familiar blood tubes on her cart, I just said, "Culture?"  She said, "No."  So I replied, "Please get out and talk to my nurse," and rolled over.

The next morning I told Doogie and we decided to put a note on the door that would hopefully prevent future errors.  So far so good.

So remember last week I couldn't eat, right?  Well, I still have to make my menu selections every day, so I do my best to pick entrees from which I might be be able to choke down a few bites.  Well, this annoyance centers around portions.

Anyway, on this particular day, I ordered the pork for lunch and checked the "small portions" check box. 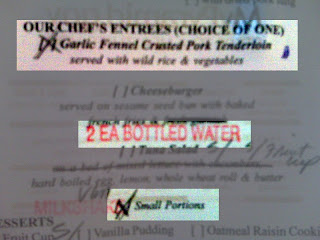 Now I ask you, does this look like a small portion? 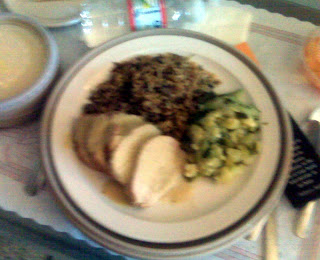 Forget lunch, that's a full-sized dinner plate.  What a waste.  Doesn't happen too much, but happens once in a while.

Oh, and then there's the water situation.  Scroll back up to the menu pic, see how it says "2 EA bottled water?" (it actually used to say "3.")  They bring me two bottles of water with every meal.  Problem is, last week, I wasn't eating or drinking much of anything, but the waters kept coming, and coming, and coming: 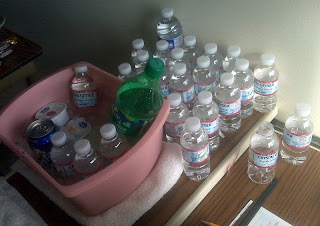 Gettin' a little out of hand, huh?  Fortunately, last night, Brandon, Loftie, and I drank a bunch watching the Eagles game, so now the stash is about cut in half.

Here's a simple rule of thumb.  When you enter someone's room, take note of the position of the door (closed? open a crack? open halfway? wide open?) and leave it the way you found it.  I can't tell you how many times I (intentionally) have the door open a crack for airflow.  Still, when some of the nurses/doctors leave the room they close the door behind them.  I'm always like, "hey, can you leave the....." -- but by that time they are gone -- too late.

This one's primarily for my brother, but I'm sure his gift wasn't the only one subject to a mailroom malfunction.  As you saw in last week's post, my bro sent some Philly sports posters to spice up my hospital room.  Originally, he was hoping they would come from for MNF last week (Mon 11/15) but the the best the poster place could do was Wed 11/17.  Well, Wednesday came and went.  On Thursday, the tracker showed that St. Mary's had signed for it at 10am on Thu 11/18, but it was nowhere to be found.  Even with my brother's calling the hospital, and me asking my nurse to check into it, it took until late Friday afternoon for them to track it down.  That's a little annoying, don'tcha think?


OK, that's all I'm going to say about that stuff.  We now return you to your regularly scheduled, upbeat, happy-as-a-clam bloggie woggie.  Go Eagles!