3 steps forward, 2 steps back (and one more forward!)

Happy Turkey Day from St. Mary's Medical Center in San Francisco.  When I was admitted on 11/5, it didn't even occur to me that I might not be out in time for Thanksgiving, let alone our move (which happened yesterday).  But here I am, almost 3 weeks later.  Here are some of the milestones that have occurred during that time:

So why the 3SF2SB title of this post?  Friday, Saturday were great days.  A few days after chemo, and I thought I was coming out of it.  Sunday was pretty good too, but that turned out to be it. Monday and Tuesday were bad.  Bad, bad, bad.  As bad as some of some of the chemo days (minus the stomach issues).  I had no energy whatsoever, my mouth hurt like a mutha-fukka, and I even got a fever for the first time in several days (a setback, albeit a very minor one) and my appetite slowed down.  Turns out my counts were way down, so they gave me some blood Tuesday.  Actually, it turned out to be Wednesday -- another classic hospital screw up.  Here's how it went down.

I heard from my doc on Tuesday late morning that I'd be getting blood later in the day.  Afternoon came and went -- no blood.  When I asked my nurse what was going on, she said that they were matching a unit, preparing, etc.  By 9pm I was exhausted and wanted to go to sleep, so I did.  At 10pm, they come in to tell me that the last blood sample they had from me (to match blood) was expired and they needed to draw more blood.  So let's review... we know at 10am that I'm getting blood sometime today, but it's not til 12 hours later that they realize they need a draw blood to do the matching?

So big deal, right?  I can get the blood while I sleep.  Not so fast.  When you get a blood transfusion, they need to check your vitals: 1) before it starts; 2) 15 mins in; 3) 30 mins in; 4) 90 mins in.  The unit takes around 3.5 hours (I think), and then you repeat the whole thing with the second unit.  This basically ensures that I got no sleep Tuesday night.  Infuriating and avoidable, but it happened.

Fortunately, I got a ton of sleep last night and I feel a lot better today, so it's a good day to half watch football and half catch-up on other things (like this blog!)  Heaven forbid I go more than a couple days without posting, right Blob?  ;)  (sorry folks, inside joke)

In other news, and as expected, my hair is starting to fall out.  Been losing quite a bit in the shower and been noticing more and more each morning when I wake up, but now it's getting out of hand.  This is from my pillow this morning: 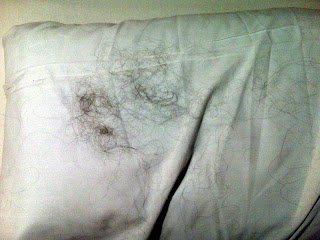 Time for Heather to come over and cut it all off.

I've also heard that you lose eyebrows, eyelashes, and nose-hairs.  Yeah, nose-hairs, so your boogers just fall out of your nose.  Can't wait for that.  Apparently, without eyebrows and eyelashes all kinds of crap gets in your eyes.  Awesome.

OK, back to Thankful mode... onto the presents. This week, I received not one, but two different T-shirts that say "jg will kick its ass!"  Big thanks to Heather/br and Kang.  Kang's is shown below, Heather's is in the wash. 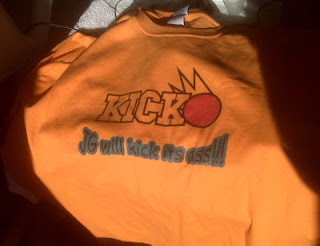 Also, the Salesforce T3 Support team (led by Jordan) got me an amazon kindle!!  What an awesome present, thanks so much, guys (and gals)... really, REALLY thoughtful of you guys. 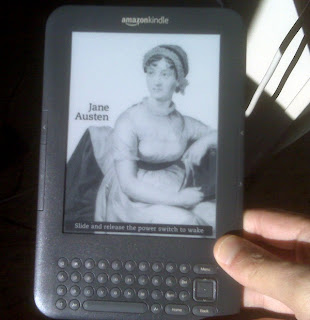 Annnnnd, saving the best for last, Meg and Hess got me a baseball autographed by Ryan Madson and an autographed pic of Quintin Mikell!  Gotta say, the baseball really takes the cake.  Not sure how you ladies work your magic, but it's very much appreciated. 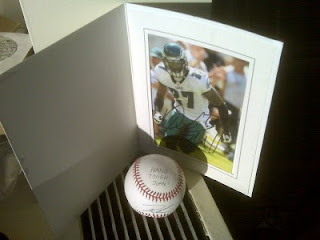 OK, Uncle Dave just showed up.  We're gonna watch the Lions blow this lead.  Heather should be here soon with a huge pair of scissors too.  Load this entry up on your iPad and pass it around the Thanksgiving table -- it'll almost be like I'm there.